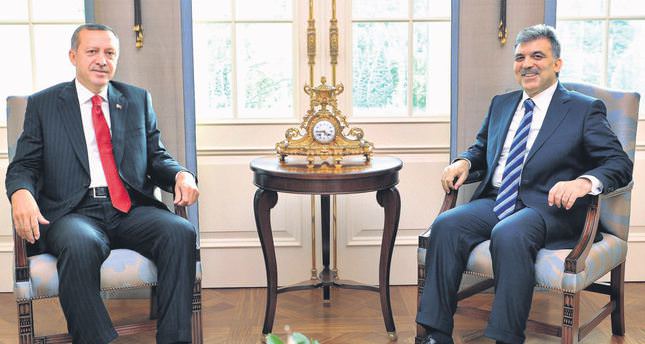 Turkish President Abdullah Gül and PM Erdoğan issued their messages for Eid al-Fitr, in which both leaders condemned the Israeli agression on Gaza as the death toll exceeded 1,000 during the last days of Ramadan

The tragedy of more than 1,000 Palestinians dying during Israel's offensive on the Gaza Strip was at the forefront of Eid al-Fitr messages issued by Turkish leaders.

President Abdullah Gül issued his last message as Turkish President and wished the nation and all Muslims world-wide a happy and prosperous Eid al-Fitr. Gül said, "[We wish] that these holy days bring peace, stability and prosperity to our country, the Muslim world and humanity and end suffering in different parts of the world".

Gül focused on the fighting in Gaza and Syria and said that all Muslims welcomed Eid al-Fitr with "sorrowful hearts," as Muslims were entering days of celebration in a time of despair and pain. "We are faced with a heart-wrenching picture in the Islamic world, particularly in Gaza, Iraq and Syria, because of all the pain suffered, blood and tears shed."

Reiterating that a war-crime was being committed in Gaza, Gül said "Without distinguishing between children, women and all civilians Israel is committing a crime against humanity. The alarming thing is that, all sides, countries and international foundations remain incapable of stopping it."

"What is more worrying, is to see that all parties of the conflict and the international community remain impotent in the face of this perilous, threatening course of events," he added. "Turkey will continue to work toward ensuring a permanent cease-fire, the entrance of humanitarian aid into
Gaza and a just and lasting peace agreement in the area. Turkey will continue standing behind the Palestinians. Once again I am sorry for the lives the Palestinians have lost and wish a quick recovery to those injured."

Gül called upon the Muslim world and the International community to help stop the bloodshed and pain, and Israel to stop its strikes on Gaza immediately.

Prime Minister Recep Tayyip Erdoğan praised the Turkish people for extending a helping hand to people suffering in flashpoint areas like Syria, Gaza, Tel Afar and East Turkmenistan during Ramadan. "Our mighty nation wants tranquility, peace, justice and democracy in its region just as it wishes for these for our country. Throughout Ramadan, we enjoyed the peace, cohesion and abundance of breathing in the same spiritual atmosphere as one, brotherly nation," Erdoğan said in his message celebrating Eid al-Fitr.

He also celebrated the Turkish people's support for the Palestinian cause since Israel began its latest offensive against Gaza on June 7. Erdoğan applauded the nation for opening the doors of the country and their homes, accepting Syrian refugees and sharing with them during this holy month. "This is what befits Turkey. We will continue demanding what we want for ourselves for the rest of the world," he added. Without forgetting tradition,

Erdoğan called on those with resentments to end them with the arrival of Eid, to drive safely, avoid fatigue and drunk driving and to continue to take care of the less-fortunate and to rejoice Eid. Parliament Speaker Cemil Çiçek stressed in his message for the religious holiday that the current state of the Islamic world made it impossible to feel the joy of Eid al-Fitr. He said, "I would like to express this with great regret that, just like the previous Eids, we are again witnessing heart wrenching events in the world. "That the majority of these events are happening in lands where Muslims live only adds to our grief and pain," Çiçek added.
RELATED TOPICS