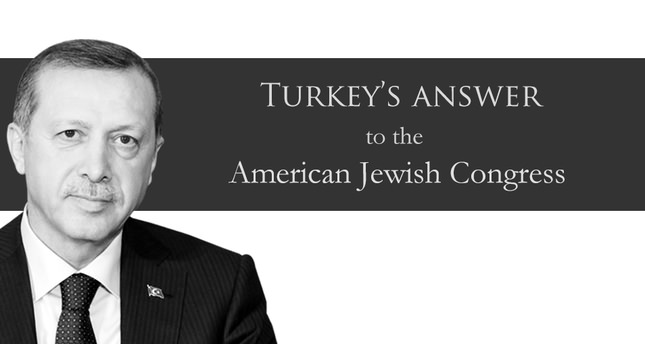 Turkey has officially answered the American Jewish Congress (AJCongress), which demanded Prime Minister Recep Tayyip Erdoğan to return the courage award he received in 2004 for Turkey ensuring protection against all –forms of malice against the Jewish community in the past.

Serdar Kılıç, Turkey's ambassador to Washington D.C., has written in response to Jack Rosen, president of the American Jewish Congress; "In view of the foregoing as well as the regrettable stance adopted by the present leadership of the American Jewish Congress vis-a-vis the recent attacks on the innocent civilians in Gaza, Prime Minister Erdoğan will be glad to return the award given back in 2004."

The ambassador's letter also remarked that Israel's offensive policy endangers all the Jews around the world, and called the AJCongress to take a stand against the violent attacks.

In the official letter, it has been stated that Turkey will continue to fight against all forms of extremism and terrorism as well as ensuring safety for the Jewish community in Turkey while working on a two-state solution for the Israeli-Palestinian conflict.

The official statement adds, "Prime Minister Erdoğan should not be expected to turn a blind eye to the policies of occupation, blockade and destruction that Israeli government has been implementing against Palestinians in the West Bank and Gaza."

The statement continues by reminding that the Israeli government continues its policies of occupation and destruction while disregarding international law:

"Attempts to depict Prime Minister Erdoğan's legitimate criticisms of Israeli government's attacks on civilians as expressions of anti-Semitism is an obvious distortion and an effort to cover up the historical wrongdoings of the Israeli government" given as a response, Prime Minister Erdoğan added the following statement in response to return of the award; "In view of the foregoing as well as the regrettable stance adopted by the present leadership of the American Jewish Congress vis-à-vis the recent attacks on the innocent civilians in Gaza, Prime Minister Erdoğan will be glad to return the award given back in 2004."

Last week, The Turkish Jewish Community (TJC) condemned the American Jewish Congress (AJCongress) for sending an open letter to Erdoğan, demanding that Erdoğan returned the courage award he received in 2004. The TJC has addressed the President of AJCongress, Jack Rosen, calling him to re-evaluate his decision. "We have just read with deep resentment your demand to the Turkish Republic's Prime Minister Erdoğan to return the award you gave him a decade ago," reads the TJC statement.

In an interview with Daily Sabah columnist Yahya Bostan, Erdoğan said that Turkey will never allow the Jewish community in Turkey to be hurt. "Jews in Turkey are our citizens. We [the Turkish government] are responsible for their security of life and property," added Erdoğan. Following Israeli aggression in Gaza, dozens of protests mushroomed across Turkey to speak out against Israeli aggression, which aroused concern over the situation of Jews residing in Turkey. "I talked with our Jewish citizens' leaders on Thursday and I stated that they should adopt a firm stance and release a statement against the Israeli government. I will contact them [Jewish leaders in Turkey] again, but whether or not they release a statement, we will never let Jewish people in Turkey get hurt," added Erdoğan.


Copy of official statement to AJCongress via Turkey's Ambassador in Washington D.C.