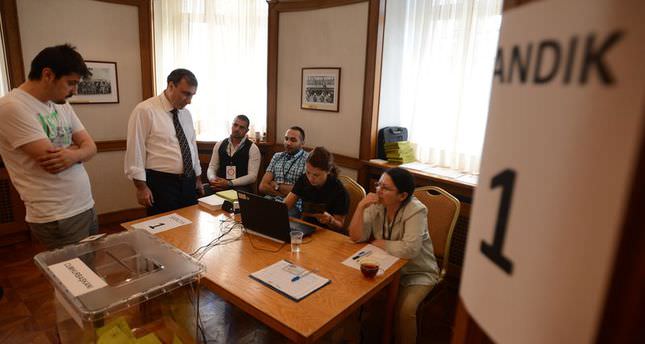 Turkish Minister of EU Affairs and Chief Negotiator Mevlüt Çavuşoğlu wrote on his Twitter account on Wednesday, "Turkish citizens living abroad can cast their votes as of Thursday. I call on Turkish citizens to look after their votes and democracy despite certain flaws in the appointment process."

Deputy Prime Minister Emrullah İşler called on citizens living abroad to go to the ballot box. On his Twitter account, İşler repeated the government's sentiment that for the first time in the country's history, ballot boxes will be set up abroad and Turkish citizens will be able to vote at 103 electoral centers in 54 countries. "I am calling on all Turkish citizens abroad to use their democratic right and go to the ballot boxes in the countries where they reside," İşler said.

Meanwhile, pre-electoral restrictions began today – visual and print media, public research polls, mini referendums or any move aiming to increase candidates' votes are prohibited by the YSK. Prime Minister and AK Party presidential candidate Recep Tayyip Erdoğan, Republican People's Party (CHP) and Nationalist Movement Party (MHP) joint presidential candidate and former Secretary-General of the Organization of Islamic Cooperation Ekmeleddin İhsanoğlu and pro-Kurdish People's Democratic Party (HDP) candidate Selahattin Demirtaş, will compete against each other for the presidency. The people of Turkey voted for their right to elect the president in a 2007 referendum leading to the upcoming popular presidential vote.