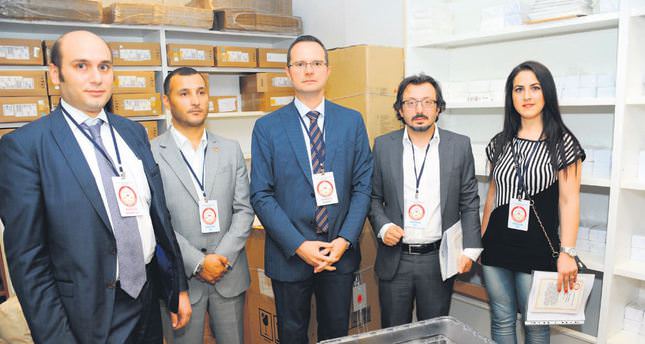 Turkish citizens residing abroad began casting their votes today for Turkey's president, with the presidential election a landmark occasion as, for the first time, Turks abroad can vote in the countries they reside

The process of voting for the next Turkish president - to be elected by popular vote for the first time in Turkey's history - has begun for Turks living abroad today. According to the Supreme Election Board (YSK), Turkish citizens living abroad can vote on the day for which they made an appointment until Aug. 3. The YSK indicated that Turkish citizens in Germany, Belgium, France, Holland, Israel, Switzerland, Italy, Northern Cyprus, Lebanon, Norway, Romania, Saudi Arabia and Turkmenistan will vote in the first round of the election between July 31 and Aug. 3. Turks residing in Canada, Australia and Russia will vote between July 31 and Aug. 2, while Turkish citizens in Bulgaria and Kazakhstan will vote between Aug.1 and Aug. 3. Turkish voters who are not able to vote on dates for which they made an appointment can also vote at custom gates until Aug. 10. Amendments regarding presidential elections introduced a new reform for Turkish citizens living abroad as well. Previously, Turkish people who resided abroad had to vote at Turkey's borders or airports, but in the upcoming presidential elections for the first time they will be able to vote in countries where they reside.

While the voting process for Turks living abroad has just begun, Turkish people living abroad, but who are currently in Turkey, started to cast their votes in the presidential election at customs gates on July 26. According to the YSK's electoral schedule, Turks living abroad, but residing in Turkey for now, can vote at the gates until the first round of the election is held on Aug. 10. If one of the candidates cannot receive an absolute majority of votes, voters will be able to cast their votes between Aug. 17 and Aug. 24 for the second round of the presidential election. Turks living abroad will be able to vote at one of the 42 customs stations, including land gates, airports and ports.

Deputy Prime Minister Emrullah İşler called out to citizens living abroad to go to the ballot box. In his twitter account, İşler echoed the government's sentiment that for the first time in the country's history, ballot boxes will be set up abroad and Turkish citizens will be able to vote in 103 electoral centers in 54 countries. "I am calling on all Turkish citizens abroad to use their democratic right and go to the ballot boxes in countries where they reside," said İşler. Members of the YSK say that 2.6 million voters are living abroad, including 1.5 million Turkish citizens in Germany and 85,000 in the U.S. This is 5 percent of the overall voters - 50 million for the upcoming presidential elections. Millions of Turkish citizens can vote in countries where they reside. In previous elections, Turkish citizens had to vote at the borders and airport since there was no amendment regarding their voting rights. According to previous figures, 7 percent of Turkish citizens living abroad - 2.6 million people - voted at Turkey's border, yet this percentage is expected to increase to 95-97 percent through the latest amendment.

Except for the amendment, Turkish citizens living abroad can still vote at the borders. It is also reported that in the countries of Germany, France and Holland, which have a significant number of Turkish citizens, Turkey held talks with sport facilities, schools and fairgrounds to be used as election areas on the grounds that Turkey's diplomatic buildings in these countries are inadequate. Turkish citizens can check their registrations on the YSK website. For those who are not registered, they can update their registrations with an address declaration via consulates with which they are associated.