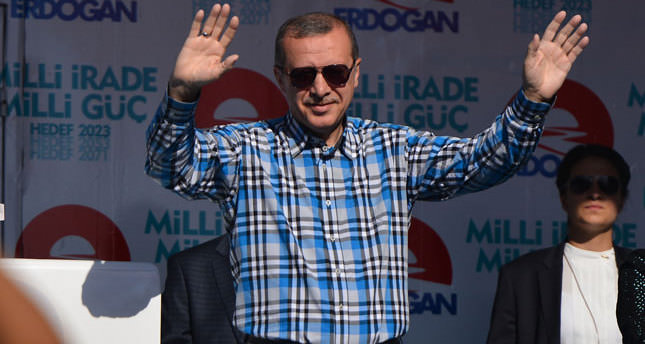 by Daily Sabah Aug 01, 2014 12:00 am
Prime Minister and presidential candidate Erdoğan, in a speech he made in the eastern province of Van, dismissed Israel's claims of self-defense and accused Israeli leadership of trying to legitimize immorality and injustice through false retoric.

"The Israeli genocide is reminiscent of Hitler's holocaust because Israel is acting with the same immorality as Hitler. They carry on Hitler's spirit," said Turkish Prime Minister Recep Tayyip Erdoğan in his political rally in Turkey's eastern city of Van yesterday where he lambasted the Israeli administration's aggression on Palestine. "Israel has sprayed death bullets on Gazans, including women and children. Children [who were killed during Israeli aggression] in Gaza did not even see Eid al-Fitr. They killed [children] in their homes, in parks and on beaches," said Erdoğan.
The prime minister denounced Israeli Prime Minister Benjamin Netanyahu after he said that Erdoğan's remarks on Israeli aggression were anti-
Semitic. Erdoğan repeated his sentiments that anti-Semitism is a humanitarian crime just like Islamophobia.

He noted that the Israeli administration tries to legitimize injustice and immorality by alleging that Israel is acting in self-defense. Saying that some are disturbed when he describes Israel's actions as genocide against Palestine, Erdoğan stated that Turkey will never be a country that remains silent against tyrants. As the second Turkish prime minister who has accused Israel of carrying out genocide against Palestinians, Erdoğan in his previous rallies stated that Turkish Prime Minister Bülent Ecevit, who was prime minister from 1999 to 2002, stood against Israeli aggression toward Gaza and described the attacks as "genocide" during his tenure. Erdoğan continued, "Both Israel and other world powers denounced Ecevit and made him apologize four times in two weeks. They still want Turkey to remain silent, but we will not comply."

Erdoğan said, "The American Jewish Congress (AJCongress) demands their award back. If they're expecting an approval for genocide then take their award back." The AJCongress sent an open letter to Erdoğan demanding that he return the courage award he received in 2004. On Tuesday, Serdar Kılıç, Turkey's ambassador to Washington, wrote in response to AJCongress President Jack Rosen: "In view of the foregoing as well as regrettable stance adopted by the present leadership of the American Jewish Congress vis-a-vis the recent attacks on the innocent civilians in Gaza, Prime Minister Erdoğan will be glad to return the award given in 2004."
RELATED TOPICS