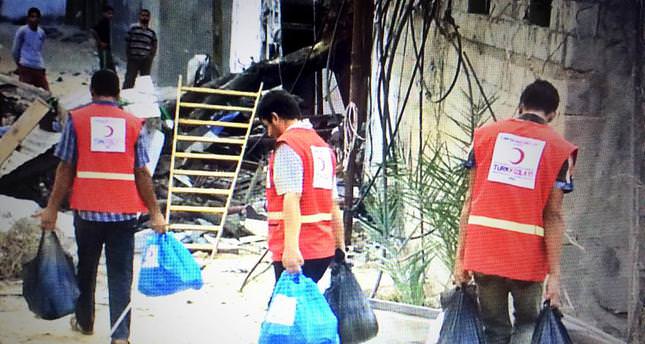 by Daily Sabah Aug 02, 2014 12:00 am
Deputy Prime Minister Beşir Atalay shared the latest figures of Turkey's humanitarian aid to Iraq in a press conference at the prime ministry's Disaster and Emergency Management Presidency (AFAD) in Ankara on Friday.

In his speech, Atalay said that while the Justice and Development Party (AK Party) has led the Turkish government, they have always been supporters of oppressed people in the world and said that Turkey has a certain policy on humanitarian aid. Pointing out that 1.2 million Iraqis have been displaced since Mosul's fall to the Islamic State of Iraq and al-Sham (ISIS), Atalay said that Turkey is one of the countries to provide humanitarian aid. "We follow Iraq very closely - we have records of all the displaced population. We have helped our brothers, Iraqi Turkmen brothers and sisters from the first moment of the crises," he added.

Referring to the humanitarian aid sent to northern Iraq, Atalay said that Turkey has sent food aid for 10,000 people just after the ISIS crisis began on June 11. "In the last oneand- a-half months, 90 trucks full of food and humanitarian aid have been distributed. All the aid is distributed in coordination with the Iraqi Turkmen Front, and the Turkish Cooperation and Development Agency (TİKA) has delivered food and hygiene supplies for 3,000 people," he said.

Atalay spoke about the future refugee tent cities that will be set up as part of Turkey's aid for displaced Iraqi Turkmens: "We have already transferred about 20,000 tents to the region and a camp for 20,000 people will be built in a week for Iraqi Turkmen brothers in Dohuk."

Devlet Bahçeli, leader of the opposition Nationalist Movement Party (MHP), alleged in recent days that the government inhibited the relief effort for Iraqi Turkmens that was organized by MHP youth organizations. Denying these allegations, Atalay said that all these claims are due to the upcoming presidential election. "We have records of all the trucks, and we even know the details of the delivery of each aid package. These claims are shameless lies, and we resent that," he said.

Regarding Israel's ongoing attack on Gaza, Atalay said that the number of people who have lost their lives in Israel's attacks has exceeded 1,400. "Even in the three days of [Eid al-Fitr], they killed 380 people. This cursed Israel has done this massacre during the Feast of the Gazan people. I condemn and curse Israel with all my heart," he said. Atalay said that Turkey is continuing its humanitarian aid and food supplies for displaced Palestinian families.
RELATED TOPICS