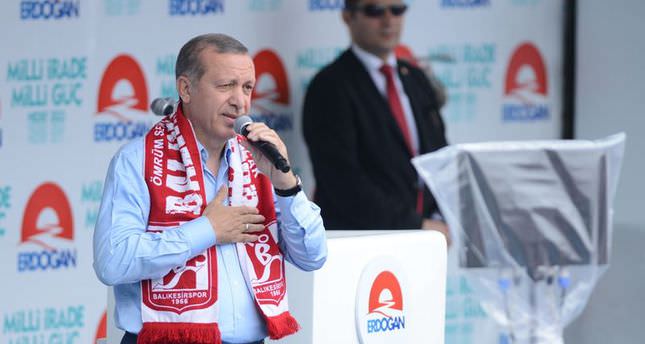 by AA Aug 02, 2014 12:00 am
BALIKESIR, Turkey—Israel violated the Gaza ceasefire to quench its thirst for the blood of innocent Palestinian children, Turkish Prime Minister and presidential candidate Recep Tayyip Erdoğan said Saturday.
"Obama is more concerned about a single Israeli soldier captured in Gaza than 1,500 Palestinians brutally murdered by Israel. What kind of justice is that?" Erdoğan asked during an election rally in the northwestern city of Balikesir. "There can be no peace, law and justice in a world where children are being killed on a daily basis."
On Friday, Israel declared the collapse of a 72-hour humanitarian ceasefire in the Gaza Strip only two hours after it went into effect, accusing Hamas operatives of killing two soldiers and capturing another.
Blaming Hamas for the collapse of the truce, U.S. President Barack Obama and UN Secretary-General Ban Ki-moon called for the unconditional release of the Israeli soldier allegedly abducted by Palestinian factions.
"More than 1,500 people have been killed in Gaza. Now Israel is crying out for one of its soldiers," Erdoğan said. "You are talking about one of your soldiers but who will render an account of over 1,500 people killed and more than 7,000 wounded."
The number of Palestinians killed since the beginning of the latest wave of Israeli onslaught on the Gaza Strip on July 7 has reached 1,660 on Saturday, according to the Palestinian health ministry in Gaza.
"At least 50 Palestinians were killed and 100 others injured in the ongoing Israeli bombardments in the Gaza Strip on Saturday," ministry spokesman Ashraf al-Qodra told Anadolu Agency.

More than 8,900 Palestinians have also been injured by Israeli assaults.