Final day for Turkish expats to cast their vote abroad 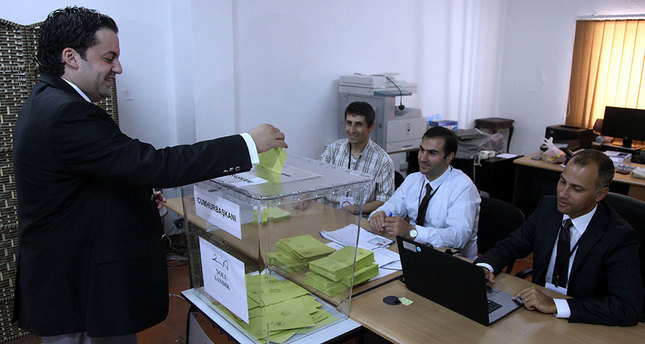 by AA Aug 03, 2014 12:00 am
The chance for Turkish nationals living outside the country to vote from abroad in Turkey's first directly elected presidential election has entered its final day.

Nearly 250,000 people out of Turkey's 2.7 million expat voters registered to cast their vote at embassies and consulates at 103 polling centers in 54 countries since voting for the August 10 poll began last Thursday, according to Sadi Güven, the head of Turkey's High Election Board.

Turkey's ambassador to Azerbaijan, İsmail Alper Coşkun, said the turnout was lower than expected in the early hours of Sunday, but added: "I expect a higher turnout as the day goes on."

Although the voting at embassies and consulates abroad ends Sunday, Turkish expats will still be able to vote at customs stations along Turkey's borders until election day.

In Turkey's neighbor Azerbaijan, more than 6,300 Turkish nationals are registered to go to the polls at three centers, including the capital, Baku.

In Egypt, where presidential opposition candidate Ekmeleddin İhsanoğlu, was born, more than 1,000 Turkish nationals are expected to cast their votes on Sunday in the capital, Cairo, and in the city of Alexandria.

Another 1,000 Turks in Iran are ready to vote in the Turkish embassy in the capital, Tehran, and in consulates in Tabriz and Urmia.

In the Balkan countries of Albania, Kosovo and Bosnia-Herzegovina, polling stations are open for several thousand Turks, while voting entered its second last day in Macedonia.

Turkey's Sarajevo ambassador, Cihad Erginay, told the Anadolu Agency that the voting was proceeding without any problem for the country's 1,500 Turkish nationals.

A total of 1,600 voters are registered to vote in the Jordanian capital of Amman.