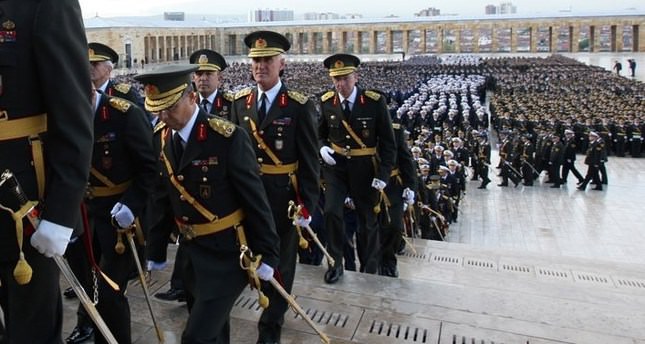 by AA Aug 03, 2014 12:00 am
The August meeting of the Supreme Military Council (YAŞ) will begin on Monday in Ankara in the Turkish military's General Staff Headquarters, to determine the military's agenda.

Decisions which YAŞ will consider at this meeting will include the trials of the generals and admirals who were jailed pending trial in the Sledgehammer (Balyoz), February 28 ('post-modern' coup of February 28, 1997) and military espionage trials. Some officials charged were released in recent months. The council is also expected to discuss the promotion of 192 generals and admirals who are on the promotion list.

The YAŞ meeting will end on Wednesday, August 6, and decisions taken will subsequently be forwarded to President Gül for ratification.
Last Update: Aug 03, 2014 3:22 pm
RELATED TOPICS