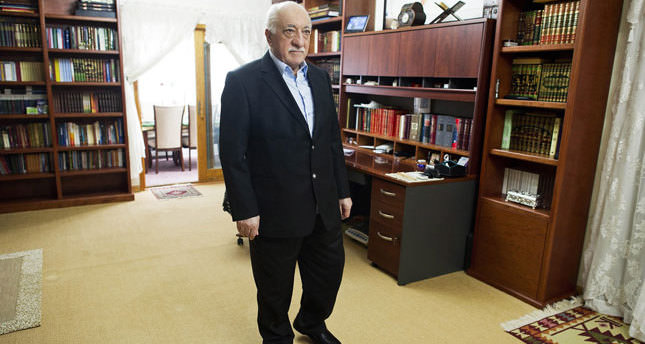 Turkey's judicial watchdog HSYK's members linked to the shadowy Gülen Movement are threatening the subvert the investigation into the espionage efforts of the movement, said the justice minister

Members of the Gülen Movement - led by the controversial U.S.-based imam Fethullah Gülen - in the judiciary are threatening prosecutors with ending their careers, Justice Minister Bekir Bozdağ said during a televised interview on Monday. A Gülenist judge had sent messages to prosecutors overseeing the investigations into Gülen Movement members, who are accused of infiltrating the police department and the judiciary, in which he threatened prosecutors to stop their investigations into Gülenists, Bozdağ claimed. "A judge sent a message to prosecutors, saying 'There will be a Supreme Council of Judges and Prosecutors (HSYK) election in October and after this election, things will change in our favor and we'll make you pay for your actions.' In a state governed by the rule of law, this person can no longer serve as a judge. He'd be accused of losing his impartiality and he would be told that he can no longer serve as an independent judge," Bozdağ said, adding that the HSYK should immediately intervene and take action against judges who have lost their impartiality.

"Unfortunately, some HSYK members are blocking our way to removing these impartial judges and prosecutors," the minister said. Minister Bozdağ, who is also the head of HSYK, stressed that the government will not allow the Gülen Movement, or any other movement or ideology, to act against the Constitution. The minister added that the movement's members, who see themselves above the law and serving their duty according to orders received from the movement, are harming the judiciary. "Unfortunately there are serious imputations on the judiciary and we cannot remove these by introducing new laws. We can only get rid of these when judges and prosecutors serve the justice. The concrete indication for the Turkish judiciary having a negative image is media portraying the Gülen Movement as having many members in the judiary,"
Bozdağ said.

The minister said he calls all judges and prosecutors to stand against their colleagues who want to turn the Turkish judiciary into Gülen's judiciary and tell them that they're serving the rule of law. "The only way to speak out against these is with the HSYK election," Bozdağ said, drawing attention to the strong Gülenist infiltration into the HSYK. "They [Gülenists] are working toward the election, in which our prosecutors and judges will go through a crucial test. Thus, I am saying that judiciary members should take necessary steps to remove shadows in the judiciary," he added.
The majority of HSYK members are believed to be undercover Gülen Movement members, some of which are trying to hide their identity with their limited support to the ongoing investigation into the movement, which was labeled as a shadowy movement that formed a "state within the state."
Within the scope of clearing the Gülenist infiltration into state institutions, prosecutors detained over a hundred officers from the police department, 31 of which were put behind bars for alleged wiretapping activities for espionage purposes.

It is also now being reported that the government's fight will turn to Gülenists in the judicary, as well as prosecutors who ruled there was a "lack of grounds for legal action" in nine cases opened against Gülen. These prosecutors are accused of avoiding a detailed investigation into cases against Gülen. The operation will also target Istanbul's specially authorized prosecutors Sadrettin Sarıkaya and Bilal Bayraktar[CT1] , who issued an arrest warrant for Hakan Fidan, the head of the National Intelligence Organization (MİT), accusing him of espionage and holding meetings with PKK leader Abdullah Öcalan and other PKK members.

Turkish government officials have continuously expressed their determination to continue to lawfully fight against the Gülen Movement, which is led by the U.S.-based imam Fethullah Gülen, whose followers are accused of infiltrating state institutions to gain control of state mechanisms and illegal wiretapping, forgery of official documents and spying. Fethullah Gülen, is a controversial imam living in rural Pennsylvania in self-imposed exile, who is at odds with the Turkish government wielding great influence inside the Turkish police forces and the top judiciary.