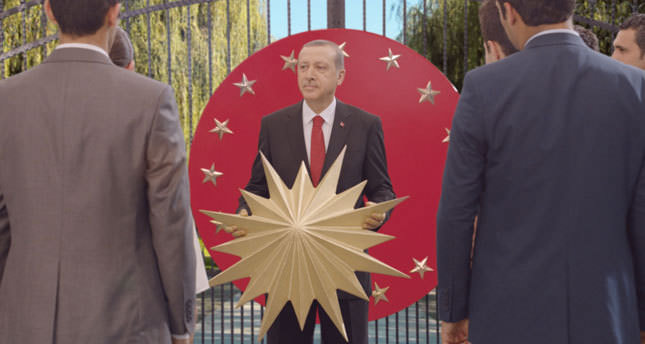 The final presidential election campaign ad of Turkish Prime Minister and presidential candidate Recep Tayyip Erdoğan recently aired on TV as Turkish citizens prepare for the first-ever direct presidential election; however, the Supreme Election Board (YSK) ruled to ban the ad after an appeal by the Nationalist Movement Party (MHP).

The YSK statement on Tuesday, argued that the prayer mat, call to prayer and a women seen praying were exploiting religion. The decision sparked controversy as the opposition's joint candidate, Ekmeleddin İhsanoğlu, also makes religious references during his speeches to the public, 99 percent of which are Muslim. The ad aired on numerous TV channels and went viral on popular video sharing and social media websites. Focusing on the theme of the presidential seal of Turkey, the ad revolved around this being the first time the people will elect the president.

The presidential seal, which contains 16 five-pointed stars symbolizing the 16 great Turkic empires in history with a sun in the middle symbolizing the Republic of Turkey, was correlated with popular representation where people from across Turkey carry a star each and reproduce the seal in a move to show that the office of the president is now owned by the people. Erdoğan received the sun within the seal from the people at the end of the ad and placed it to where it belongs.

One of the main highlights of the ad was Sezai Karakoç's poem, "From a Country of Exile to a Capital of the Capitals," which was recited by Erdoğan. Evaluating Erdoğan's last campaign ad, Talha Gülören, who is one of the co-founders of the Pul Advertisement Agency, said that it is considerably effective in general terms. "The main reason for this is Karakoç's moving poem and the slogan at the end where the protagonist says the people are electing their president," said Gülören, who noted that the ad gives an extremely positive impression.

More importantly, he said that it is very convincing and expressed that the main message of Erdoğan's presidential election campaign was effectively conveyed. In terms of criticism though, Gülören said that the ad has a few shortcomings in terms of technical details. He said that the setting could have been established in a more pleasant atmosphere and argued that the setting did not match the poem. He remarked that the transition between the scenes could have been smoother but these small details do not matter when a general evaluation is made.

In comparison to İhsanoğlu's campaign ads, Gülören said that Erdoğan's ads looked more professional and İhsanoğlu's ads were extremely amateur. For instance, he said that the font used in his campaign has received serious criticism and some people even made fun of it while the slogan did not promise anything. "Turkey is no longer a country where people can barely make the ends meet to buy bread," said Gülören and added that Turkey has more advanced goals while saying that İhsanoğlu's ads have failed to be inclusive of all people and lack sincerity in general.

Previous campaign ads focused on Erdoğan's performance as prime minister and the numerous projects that he undertook including the ones in health, education and transportation sectors along with many others. Generally, the ads conveyed Erdoğan's relation with the Turkish people and revolved around the idea that electing him president would empower the nation as he promised to carry out numerous projects until 2023 to further develop Turkey's status and the well-being of the people.
Last Update: Aug 06, 2014 10:17 am
RELATED TOPICS