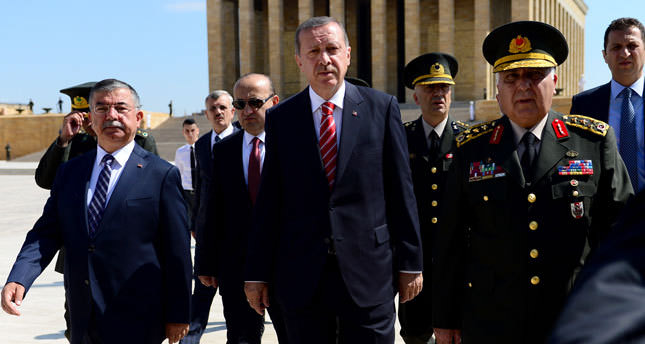 The Supreme Military Council, chaired by Erdoğan, meets to decide on the promotions and retirements within the military

Headed by Turkish Prime Minister Recep Tayyip Erdoğan, the Turkish Supreme Military Council (YAŞ) convened yesterday at the headquarters of the army chief in Ankara to discuss the country's military agenda. YAŞ, comprised of the prime minister, defense minister and the 15 highest-ranked members of the Turkish Armed Forces (TSK), to decide on promotions and retirements within the Turkish military, is expected to continue to meet until Aug. 6. The meeting may also witness Erdoğan's last chairmanship as prime minister if he gets elected as president after the Aug. 10 election.

On the first day of the YAŞ meeting, Erdoğan wrote in the guestbook at Anıtkabir, the mausoleum of the founder of the modern Turkish Republic, Mustafa Kemal Atatürk, "We [Turkey] continue our efforts to [actualize] Turkey's 2023 vision. Our objective is to turn Turkey into one of the top 10 developed countries in the world. We are in effort to make welfare and peace permanent in the region by strengthening our power, and protecting our stability." Erdoğan added that the crucial process that Turkey is going through is another indicator that the government is committed to strengthening the Turkish army through modern equipment, qualified manpower and high operational capability.

According to military sources, the agenda of the meeting is dominated by the annual round of appointments and promotions. The military council is expected to discuss the promotion of 192 generals and admirals who are on the promotion list. They are also expected to consider the generals and admirals who were jailed pending trial in the Sledgehammer (Balyoz), Feb. 28, and military espionage trials and released in recent months.

At the meeting, military sources do not expect any changes in the country's military command echelon, and Chief of General Staff, Gen. Necdet Özel, Chief of the Army, General Hulusi Akar, Naval Forces Commander, Admiral Bülent Bostanoğlu, and Air Forces Commander, Gen. Ali Öztürk are expected to continue their duties.

A senior military officer stated that in recent years, the 2nd Air Force Command in Diyarbakır was responsible for counterterrorism missions, but the real reason YAŞ may decide to close the command stems from normalization in the southeastern part of the Turkey due to the ongoing reconciliation process. The YAŞ meeting will end on Aug. 6, and the decisions will subsequently be forwarded to President Gül for ratification. The military council traditionally meets twice a year to discuss issues related to personnel, training and future plans for the armed forces.