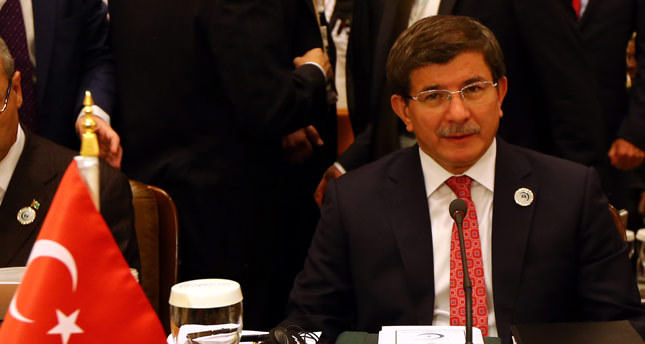 by AA Aug 06, 2014 12:00 am
In a statement made after the 72-hour cease-fire in Gaza was called, Turkish Foreign Minister Ahmet Davutoğlu stated that Turkish aid organizations on the ground in war-stricken Gaza are working quickly to rebuild Gaza and help Palestinians return to their ordinary lives. Turkey has welcomed Egypt's proposal of a 72-hour cease-fire in Gaza that came into effect at 08:00 a.m. local time on Tuesday.

Turkey urged Israel to stop its attacks on the Gaza Strip and called on both sides to avoid any steps that would violate the threeday cease-fire. "We wish that this truce will form the required basis for negotiations to reach a lasting cease-fire in Gaza," a statement by the Turkish foreign ministry read. "It should be understood that a lasting cease-fire in the region will only be possible with the lifting of the blockade in Gaza," it added.

Turkish Foreign Minister Ahmet Davutoğlu also said on his official Twitter account that he was pleased that the ceasefire was reinstated. Last Friday, a similar cease-fire crumbled two hours after it had come into effect when Israel resumed its aerial strikes against the blockaded Gaza Strip, claiming that Gaza-based groups had kidnapped an Israeli soldier.

Israel later declared that the soldier had been killed in combat. Israel has pounded the blockaded Gaza Strip - home to 1.8 million people - since July 7. At least 1,867 Palestinians, mostly civilians, have been killed and 9,450 have been wounded in the unrelenting Israeli attacks. The Turkish foreign ministry issued a statement on Monday condemning the Israeli shelling of a U.N. school on Sunday which killed at least 10 Palestinians and wounded 50. "We fully agree with the U.N. Secretary General's comments about the attack, that it is a criminal act," said the statement. Palestinian civilians, U.N. staff and U.N. premises "must be safe zones, not combat zones," he stressed. "It is a moral outrage and a criminal act." The ministry also called on the international community to act against Israel's "unprecedented attacks."
Last Update: Aug 06, 2014 8:07 am
RELATED TOPICS