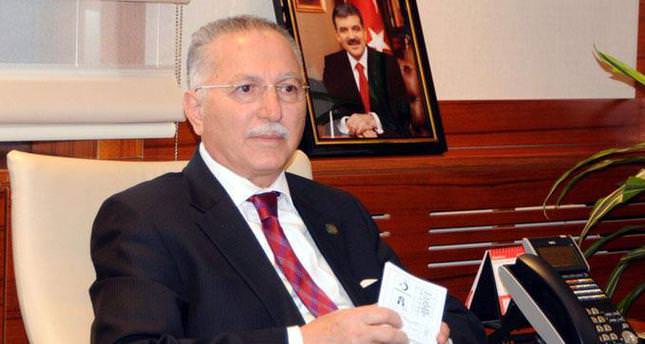 by Daily Sabah Aug 06, 2014 12:00 am
Turkey's main opposition, the Republican People's Party (CHP) and the Nationalist Movement Party (MHP) joint presidential candidate, Ekmeleddin İhsanoğlu, on Monday asked for the votes of the Justice and Development Party (AK Party) voters, claiming that if they wanted AK Party to keep up its good work they needed to vote for him.

The former Secretary-General of Organization of Islamic Cooperation said in Ankara yesterday, "I am calling for my AK Party brothers and sisters.
Vote for us, then your party will be protected. Your order will be protected, it will not separate. ANAP [center right Motherland Party], [center-right] Right Path Party separated. If you [AK Party supporters] like AK Party, if you want it to continue its good services, protect your party, and vote for someone who comes from your background."

The joint candidate noted that the silent population will go to the ballot box on Aug. 10. "Enough, it is time for nation to speak," said İhsanoğlu. "We are ready to share our bread with everyone, but we will never share our land with others, everyone should be aware of it. May God punish those who tried to seed separation across the country. We want unity, integrity. The presidential seat is not for polarization and separation, it is for unity."

İhsanoğlu also touched upon the atrocity happening in Gaza and said that every move to ensure a cease-fire and to protect innocent Palestinian civilians should be taken.

When a journalist asked what he predicts regarding political conjuncture in Israeli attacks on Gaza, İhsanoğlu said, "The disproportionate attacks and violent aggression has been continuing for a long time, and it appears that it is set to continue since there is no power to stop Israel. Israel wants to sweep away all the resistance power and weapons of Hamas." He added that if an injunction decision will not be adopted under the U.N.'s 7th chapter, Israel will continue its attacks.

The CHP and MHP's joint candidate further criticized the Turkish government's economic policies by alleging that the industry share in the country's economy is decreasing and Turkish citizens are in debt. He pledged that amendments in economic policies will top his agenda if he is elected as Turkey's 12th president.

Also, İhsanoğlu pledged to defend the superiority of law, rule of law, parliamentarian regime, social justice and to treat all citizens equally if he gets elected as the president.