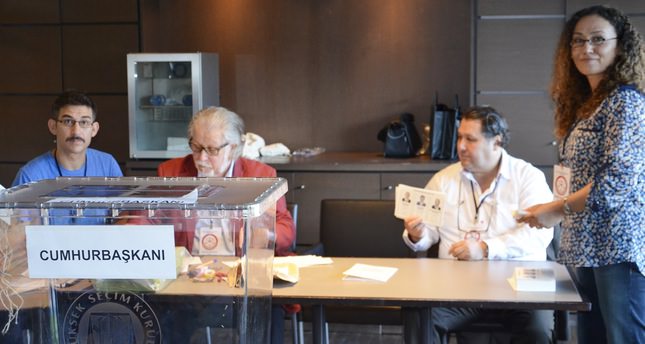 by Daily Sabah Aug 06, 2014 12:00 am
After the voting process by Turks living abroad ended on Aug. 3, their disappointment in the process for the first direct presidential election surfaced. The Turkish Supreme Election Board (YSK) proposed an appointment system for expat Turks to vote in consulates and embassies, but most Turkish citizens living abroad had trouble going to polling stations to exercise their democratic rights according to electoral participation figures coming from abroad.

On Monday, Turkish Prime Minister and Justice and Development Party (AK Party) candidate Recep Tayyip Erdoğan, speaking on a TV program regarding the presidential election, put blame on YSK and noted that participation in the election was around 10 percent of the expat community due to YSK's appointment system. Erdoğan said, "Citizens do not bother with making appointments to vote. We [Turkey] should be more facilitating on this issue, but it appears that the participation in [voting abroad] will hardly exceed 10 percent."

While the votes cast in more than 53 countries have begun to be transferred to Turkey, expat Turks who made appointments but could not vote will only able to vote at Turkish borders and customs gates for the Aug. 10 presidential election.

Celal Çakmak, an expat Turk, said that he made an appointment on the YSK system for himself and four expat Turks on June 24, but when they arrived to cast their votes, they realized that the date was different than the one that they were given. "I traveled 40 kilometers to get here. This is not good. I know scores of people that were not able to make appointments on the YSK system," asserted Çakmak.

According to YSK, Turkish citizens living abroad would be able to vote on the day for which they made an appointment until Aug. 3. They indicated that Turkish citizens in Germany, Belgium, France, Holland, Israel, Switzerland, Italy, Northern Cyprus, Lebanon, Norway, Romania, Saudi Arabia and Turkmenistan could vote in the first round of the election between July 31 and Aug. 3. Turks residing in Canada, Australia and Russia could vote between July 31 and Aug. 2, and Turkish citizens in Bulgaria and Kazakhstan could vote between Aug. 1 and Aug. 3. YSK suggested that Turks living abroad, but residing in Turkey for now, vote at border and customs gates until the first round of the election is held on Aug. 10.

If one of the candidates does not receive an absolute majority of the vote, voters will be able to cast their votes between Aug. 17 and Aug. 24 for the second round of the presidential election. Turks living abroad are able to vote at one of 42 customs stations, including land gates, airports and sea ports until Aug. 10.
Last Update: Aug 06, 2014 12:33 pm
RELATED TOPICS