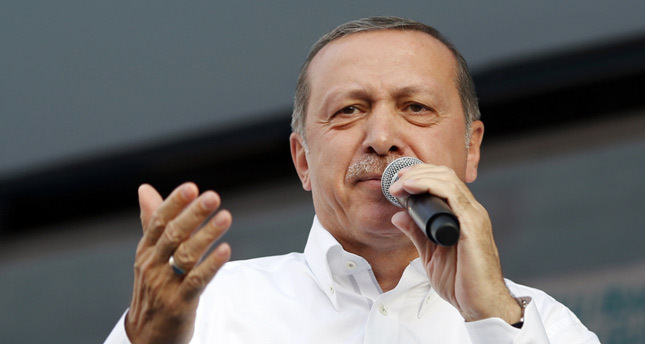 by Daily Sabah Aug 07, 2014 12:00 am
Turkish Prime Minister and Justice and Development Party (AK Party) presidential candidate Recep Tayyip Erdoğan said in his rally in Turkey's western city of Aydın that the Aug. 10 presidential election will mark the end of politics without projects in Turkey.

Touching on his 12-year tenure in office, Erdoğan pledged to continue to serve the nation with new projects. Criticizing Republican People's Party (CHP) and Nationalist Movement Party's (MHP) joint presidential candidate Ekmeleddin İhsanoğlu's policy toward the presidency, Erdoğan said that İhsanoğlu, the former secretary- general of the Organization of Islamic Cooperation (OIC), is completely foreign to Turkey and the latest developments in Turkey due to the fact that he lived abroad for years.

He also accused İhsanoğlu of having no projects pledged for the future if he gets elected president. Erdoğan also said that Turkey is a country united with all of its nations and citizens. Slamming the Gülen Movement, which allegedly infiltrated the police and judiciary with an aim to overthrow the government, Erdoğan said that the Turkish government never lets organizations establish a state within the state.
RELATED TOPICS