Military tutelage closer to its end with gendarmerie reform 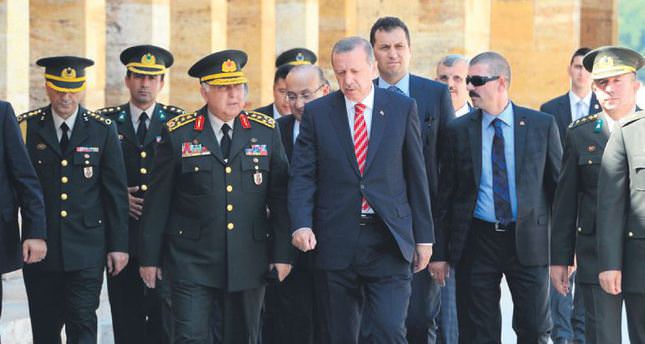 by Daily Sabah Aug 07, 2014 12:00 am
The ruling Justice and Development Party (AK Party) government is working on a new legislation package to reform the Gendarmerie General Command to make the military institution compatible with European Union standards.

Interior Minister Efkan Ala announced that the government is set to reform Turkey's Gendarmerie General Command, and the legal amendments would be discussed in the next legislative period. Reformation of the gendarmerie was voiced by the EU in last year's progress report, and restructuring the gendarmerie force was classified as a medium-term target. According to the current legislation, the Gendarmerie Command theoretically functions under the Interior Ministry; however, the promotions and dismissals inside the gendarmerie are decided by the General Staff.

Regarding the necessity of the reformation of the Gendarmerie Command Ala said, "The relationship between the gendarmerie and the Interior Ministry should definitely be reformed. We have already worked on this issue, and we will share it with the public in the coming days." Regarding the timing of the reforms, the Ala said that a part of the legal amendments would be discussed in the next legislative period. According to sources in the Interior Ministry, the reformed gendarmerie will be based on the French and Italian models. Under the reform plan, the legal status of the Gendarmerie General Command will be equal to that of the National Police Department.

Both departments will be part of the Undersecretariat of Public Order and Security, a new unit that will be solely responsible for coordinating security units in fighting terrorism. Currently, the paramilitary gendarmerie maintains security in rural areas, while the police are in charge of districts and city centers. Under the reform plan, the country's prisons and jails will be taken out of the jurisdiction of the Gendarmerie General Command. Instead, it will be restructured to have significant responsibility in securing Turkey's borders.

In recent years, the government planned to restructure the gendarmerie as part of the EU reform process, and had been laid out in the 3rd National Program. With the reform program, the gendarmerie would be brought under complete civilian control, and instead of a senior general, a civilian administrator appointed by the Interior Minister will be head to the Gendarmerie General Command.
Last Update: Aug 07, 2014 9:00 am
RELATED TOPICS