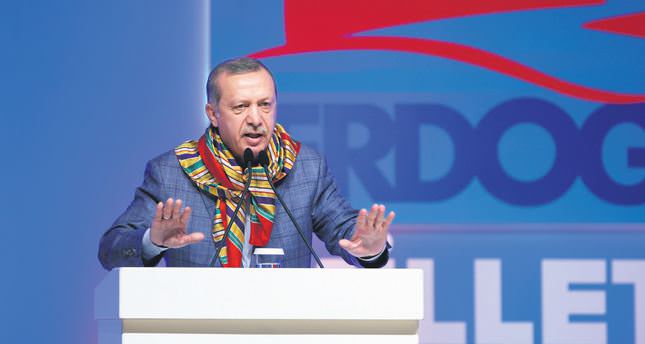 Turkmen associations in Turkey declared their allegiance to Erdoğan, and Turkmen leader Uluer said they would be endorsing him in Sunday's presidential election

Speaking at an event organized in Ankara's ATO Congress Center, Turkey's Turkmen leader Halil Uluer said that Turkey has been extending its helping hand to all people who share the same values and those who are oppressed for the last 12 years. Saying that Erdoğan is a friend of all people who are oppressed and exposed to violence around the entire world, Uluer said that they will support Erdoğan in the election because he protects the values of Turkish citizens. Uluer said, "True nationalism requires voting for Erdoğan who was born and raised in these lands. True nationalism is to walk together as friends without any discrimination or accusations."

He added, "The criteria for real nationalism is serving the country. Standing against the massive projects or supporting those who are against the projects is not called nationalism, but betrayal." Uluer harshly criticized those who claimed that Turkey has not helped Turkmens who are in need.
He said, "I am disgusted when I see those who cannot even find the city of Urumqi on the map and yet try to accuse Turkey of neglecting us, as part of their political propaganda."

The head of the World Turkmen Union, İsmail Demirdüzen also said that the union will support Erdoğan in the election and praised Erdoğan's political stance in foreign politics. Speaking at the event in ATO Congress, Erdoğan mentioned the latest developments in the region and said, "Our brothers and sisters are getting killed in Iraq, Syria, Palestine and Ukraine, they clashed with each other or stayed between two clashes. Even though all those negative developments, Turkey continues its stable, trustful and peaceful steps for the future."

Erdoğan accused previous Turkish governments of remaining silent while Turkmens were killed in Iraq in 1980, 1991 and 1996 and said that with the AK Party government, Turkey started to raise its voice against those massacres. "Turkey means hope, Turkey means peace and Turkey means justice.

Those who see our flag also feel the trust. Those who see our Red Crescent feel the trust. We [Turkey] extend our helping hands to everyone who is oppressed and looking for help." Speaking about the latest Israel-Palestine conflict, Erdoğan said Israel started a genocide initiative, but Turkey extended its helping hands to Gazans with all its financial capability and consciousness. "For us, sects, languages or races of oppressed people are not important. We take side with Turkmens even more than we take care of Gazan people," asserted Erdoğan. He also said that the Turkish government lowered the age of candidacy to 25 to let younger Turkish generations go into politics and now, the government aims to lower the age limit to 18.

Criticizing the far-right Nationalist Movement Party (MHP) reaction to reducing the age of candidacy, Erdoğan said, "When we [the AK Party] reduced the age of candidacy to 25, one of the MHP representatives in Parliament stated that Parliament should not be left to children.
Those who can take the responsibility of representing the nation will take seats in the parliament. Young generations, young people can say that they want to do politics when they graduate from university."

The prime minister pointed out that the minimum age for candidacy in most European countries, such as Germany and Holland is 18, while others have an age limit of 21. Erdoğan added that what is more difficult is not to be elected, but to elect. Also, Erdoğan said that Turkish government will keep working to reach its 2023 vision of a new Turkey.
Last Update: Aug 07, 2014 1:05 pm
RELATED TOPICS