PM calls businessmen to speak out on Gülenists' blackmailing 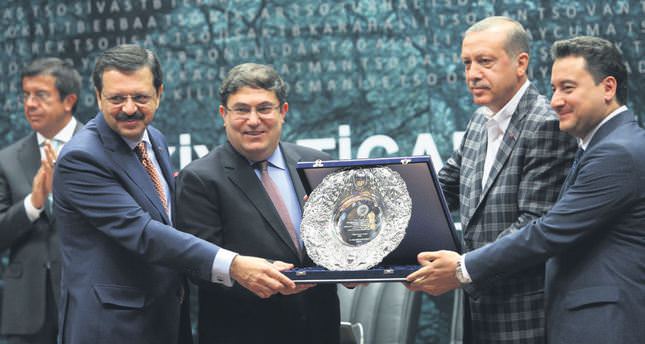 by Daily Sabah Aug 08, 2014 12:00 am
Addressing members of Turkey's biggest business group, Prime Minister and presidential candidate Recep Tayyip Erdoğan said businessmen who were blackmailed by members of the Gülen Movement in the judiciary and police department should speak out about what they are facing.

Speaking at the Turkish Union of Chambers and Commodity Exchanges' (TOBB) seventh Turkish Trade and Industry Council meeting on Thursday, Erdoğan criticized prosecutor Zekeriya Öz, who is known as one of the influential members of the Gülen Movement, led by U.S.-based imam Fethullah Gülen, in the judiciary. Commenting on Öz filing a complaint, Erdoğan said, "The judiciary causes serious suspicions of itself as a prosecutor [Öz] is freely able to insult the prime minister with his immoral words, which also isn't acceptable according to the ethics of the state." Erdoğan's remarks came on the same day that Turkish media revealed an alleged recording of Öz in which he asks a businessman to buy him a jacket and sunglasses he saw at a shopping mall in Istanbul.

"Combating the parallel state is not the struggle of myself or my party but the fight of Turkey and is a state security matter," Erdoğan said, adding that Gülenists illegally recorded his conversations with leaders of other countries. He alleged that the opposition parties' collaborating with Gülenists in their opposition to the government and said, "They're accusing me of speaking harshly. I will continue to be harsh on these [Gülenist] people. They're blackmailing people and staging an agenda within the state. They [Gülenists] stabbed us in the back and they will do the same to the opposition parties when they have the chance."

Deputy Prime Minister Emrullah İşler also criticized prosecutor Öz, saying that he is acting impartially as a prosecutor and that if Öz wants to continue his political remarks, he has to quit his job and go into politics. Justice Minister Bekir Bozdağ recently criticized Öz for threatening Erdoğan with death and has called the Supreme Board of Judges and Prosecutors (HSYK) to act against the prosecutor who lost his "independence and impartiality." "No one should desire dictatorship after the last century. His end will be like Saddam and Gadhafi. No matter who adopts lawlessness pays the price," Prosecutor Öz said via Twitter in recent days.

Turkish media previously reported that Öz and his family went on a luxury vacation to Dubai and claimed that the Turkish real estate tycoon Ali Ağaoğlu, who was briefly detained for questioning as part of the Dec. 17 operation, covered travel costs in excess of $40,000 (TL 86,408). Press reports led the HSYK, Turkey's leading authority on judicial affairs, to initiate an internal investigation to shed light on the prosecutor's ties with the business tycoon. In May, HSYK, which has a mandate to inspect and examine judges and prosecutors in Turkey, approved a request to start an investigation into prosecutors Zekeriya Öz, Celal Kara and Muammer Akkaş and judge Süleyman Karaçöl, but then reversed their decision saying that it was "unnecessary."

The group, allegedly run by the U.S.- based controversial imam Fethullah Gülen, has been accused of conducting illegal wiretappings of thousands of people in Turkey. The prosecutors who conducted the Dec. 17 operation are accused of acting under the orders of the movement and its coconspirators. Öz was reassigned twice following the probe as part of the government's efforts to weed out Gülenists from the judiciary.

The Gülen Movement operates in hundreds of locations throughout the world via charter schools and other activities. Their activities have been subject to government scrutiny in Azerbaijan, Russia, Germany, the U.S. and other countries. They are currently accused of infiltrating Turkish state institutions to establish "a state within a state" that would pay allegiance to Gülen. The movement denies these claims and has radically changed its political stance since the government proposed closing prep schools in Turkey, which are mostly operated by the Gülen Movement.

After 12 years in power, which has seen his government tame the influence of the once-powerful military, Erdoğan has declared a war against Gülen, accusing him of running a parallel state. Erdoğan also accused the movement of being behind a series of recordings posted on the Internet suggesting the prime minister and his family members were engaged in corruption.

The Scientific and Technological Research Council of Turkey issued a report on the recording, saying that the tape recordings posted on social media platforms allegedly belonging to the prime minister and his family, were fabricated by electronically cutting and pasting different syllables from different speeches under a single pool of voice recordings.
Last Update: Aug 08, 2014 6:31 pm
RELATED TOPICS