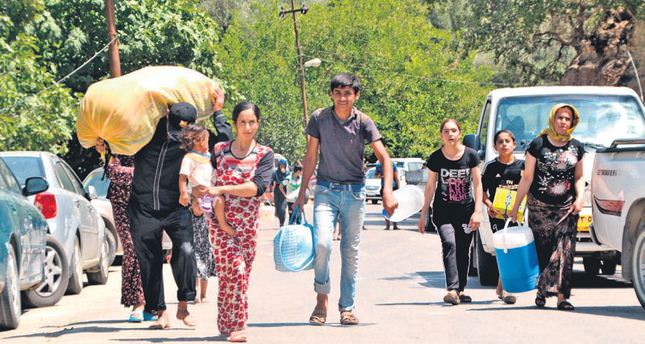 While fierce clashes are ongoing against Iraqi forces and Kurdish Peshmerga, Islamic State of Iraq and al-Sham (ISIS) militants continue to tighten their grip on the northern and eastern parts of Iraq. The headway made by ISIS and the latest humanitarian crises in Iraq has alarmed Turkey with the latest developments in Iraq being followed closely, forcing international powers to hold frequent meetings.

Turkish statesmen held a meeting on Friday with the participation of Chief of General Staff Necdet Özel, Vice Chief of General Staff Yaşar Güler, General Commander of Gendarmerie Forces Servet Yörük, Foreign Minister Ahmet Davutoğlu, Prime Ministry Undersecretary Fahri Kasırga and National Intelligence Organization chief Hakan Fidan. In a one-hour closed-door meeting, the tense situation on the Iraqi border and the precautions taken were discussed, said sources, including the option of military intervention and what has been done with regard to humanitarian aid to the Sinjar region. According to a senior official in the Foreign Ministry, Davutoğlu and U.S. Secretary of State John Kerry talked on the phone during the meeting. According to sources from the Office of the Prime Ministry after the meeting, Turkey's course of action was identified as follows:

Turkey's top priority will be humanitarian aid. A refugee camp will be set up in Duhok. Considering the situation of hostages in Mosul, Turkey will also coordinate with the U.S. concerning airstrikes, and the region where the hostages are located will not be targeted. Simultaneously, Turkey will keep a eye open at its border with Iraq. In case clashes intensify in Irbil, a course of action for the Turkish consulate in the city was also prepared during the meeting. Previously the same day, Davutoğlu chaired a security meeting with Fidan, General Commander of Land Forces Hulusi Akar and General Commander of Gendarmerie Forces Yörük in the residence of the Foreign Ministry. Sources from the ministry said the subject of the meeting was the advance by ISIS in the northern Iraqi region.

Immediately after the meeting, Davutoğlu responded to questions in a live broadcast saying Turkey is the only state that conducts humanitarian operations in Iraq for people fleeing from ISIS's advances. "A huge package of humanitarian aid was provided by AFAD (Turkey's disaster agency) and delivered by Iraq's helicopters for Yazidis sheltering in the Sinjar mountains," the foreign minister said in the broadcast and noted that not a single Yazidi is kept waiting on the Turkish border while trying to cross into Turkey. About humanitarian aid to Turkmens, he said, "What we want to do is to set up camps in the Kurdish region," referring to plans for a 20,000 capacity refugee camp for Iraqi Turkmens. Meanwhile, the ISIS advance into northern Iraq continues. Recent advances forced 5,000 refugees in Irbil's Hazer camp to be evacuated as a safety procedure for fear of future attacks. It has also aroused anxiety among tens of thousands of people in Irbil.

Many have swarmed to terminals and airports to flee from ISIS. Those Iraqis who wanted to stay stockpiled food and oil. Also the town of Makhmour and the refugee camp in northern Iraq, that is home to 12,000 Turkish Kurds, was taken over by ISIS as well. Regarding rising concerns, Mehmet Akif İnam, Turkish consul in Irbil, said the consulate has prepared an action plan and is ready for an urgent evacuation. "There is no risk, as of now we are safe. But it is hard to predict what will happen tomorrow. We have finished the planning process," the consul said.
RELATED TOPICS