Nation goes to the polls to elect its president 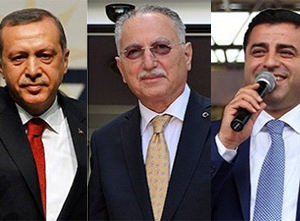 by Daily Sabah Aug 09, 2014 12:00 am
More than 50 million citizens eligible to vote will go to the polls this Sunday to directly elect their president for first time in history. With three candidates in the running, most pundits believe Prime Minister Erdoğan will easily garner the necessary votes to win without a run-off.

With family origins in Rize, Recep Tayyip Erdoğan is a father of four, and was born in Istanbul's Kasımpaşa neighborhood on Feb. 26, 1954. He graduated from the Istanbul Religious Vocational High School (İmam Hatip Lisesi) in 1973, and then graduated from Marmara University's Faculty of Economics and Commercial Sciences in 1981.

He played football as an amateur over the years between 1969-1982. It was also in those years that Erdoğan began to take his first steps into politics. An active member of various branches of the Turkish National Students' Union in his high school and university years, in 1976, Recep Tayyip Erdoğan was elected Chairman of the Beyoğlu Youth Branch of the National Salvation Party (MSP) - later to be elected chairman of the party's Istanbul Youth Branches in the same year.

When the Welfare Party (RP) was established after the military coup in the 1980s, Erdoğan returned to politics, and in 1984, he became the Beyoğlu district chairman of that party. Erdoğan was later elected as the Istanbul mayor in the March 27, 1994 local elections. Erdoğan was sentenced to a term in prison because of a poem he recited on Dec. 12, 1997 during a public address in the province of Siirt in southeastern Turkey.

The poem was quoted from a book published by a state enterprise, and one that had been recommended to teachers by the Ministry of Education. It included verses which translate to, "The mosques are our barracks, the domes our helmets, the minarets our bayonets and the faithful our soldiers." Because of this conviction, Erdoğan was forced to resign from his post as mayor, and he completed his four months sentence beginning July 24, 1999, with a temporary ban from politics. He later established the Justice and Development Party (AK Party) with a group of friends on Aug. 14, 2001, and was subsequently elected founding chairman of AK Party by the founding board.

Appointed prime minister on March 15, 2003, Erdoğan implemented numerous reforms of vital importance within a short period of time. A great deal was achieved in democratization, attaining transparency and preventing corruption. Parallel to this, inflation, which had adversely affected the country's economy and the people's psychological state-of-mind for decades, it was finally taken under control, and the Turkish lira earned unprecedented prestige through the elimination of six zeros. Interest rates for public borrowing were brought down, and per capita income grew significantly. A host of new dams, housing projects, schools, hospitals and power plants were inaugurated at a pace never before witnessed in the history of the country. All of these positive developments were named "the Silent Revolution" by some foreign observers and Western leaders.

Selahattin Demirtaş was born in Diyarbakır, Turkey in 1973 and attended both primary and secondary school there. He started his higher education in the Faculty of Maritime Commerce and Management at 9 Eylül University in İzmir. Demirtaş was forced to leave due to political problems, but retook the university entrance exam the following year and was accepted into the Faculty of Law at Ankara University. After graduating he worked as a freelance lawyer and was then elected as a member of the Human Rights Association (IHD), in Diyarbakır.

The following year, Demirtaş replaced Osman Baydemir as the chairman of IHD after Baydemir was elected mayor of Diyarbakir. During his term as chairman, the association focused heavily on the increasing unsolved political murders in Turkey. Demirtaş is among the founding members of the Turkish Human Rights Association (TIHV) and Amnesty International's offices in Diyarbakır.

Demirtaş began his political career in 2007 as a member of the Democratic Society Party (DTP). In his first campaign he was one of the 'Thousand Hope Candidates' for the DTP and several other democratic organizations in Turkey. He won election to the 23rd Parliament and became the parliamentary chief officer for the DTP at the age of 34.

Upon the Constitutional Court abolished the DTP in 2009 DTP parliamentarians created the Peace and Democracy Party (BDP). The new party held its first congress in 2010 where Selahattin Demirtaş and Gültan Kışanak were elected as its first co-chairs. Demirtaş contested the 2011 elections as part of the joint 'Labor, Democracy and Freedom' list that was endorsed by the BDP and 18 different democratic political organizations from Hakkari. He was later re-elected to the 24th parliament.

Demirtaş was still the BDP co-chair at the time the Kurdish reconciliation process began in Turkey. In 2014 he and Figen Yüksekdağ were elected as the new co-chairs of the newly created Peoples' Democratic Party (HDP). The impetus for the creation of the new political party began with a three year coalition between the BDP and other political parties and organization under the name of the Peoples' Democratic Congress (HDK).
Demirtaş is the presidential candidate for the HDP in the first ever direct presidential election in Turkey.

Academic and author Ekmeleddin İhsanoğlu's academic work has focused on Turkish culture, cultural exchanges between Islam and the West and the relationship between the Turkish and Arab worlds. He was the secretary-general of the Organization of Islamic Co-operation (OIC), the second largest international organization after the U.N., between 2004 and 2014.

İhsanoğlu is the joint candidate of the Republican People's Party (CHP) and Nationalist Movement Party (MHP) for the 2014 presidential election.
He was born in Cairo on Dec. 26, 1943 and has roots in Yozgat in central Turkey.

Upon graduating from Khedive Secondary School in Egypt, he studied at the Ain Shams University and received a Bachelor of Science degree. During his studies, he worked in the National Cairo Library cataloging Turkish works. He graduated from the Faculty of Science in 1966 and continued his academic career at Al-Azhar University. During his postgraduate studies at Al-Azhar University he taught? Turkish linguistics and literature and tutored at Ain Shams University.

Beside his work on the history of science, İhsanoğlu familiarized the Arabs with Turkish culture by translating the works of Turkish poets including Hamid, Tevfik Fikret, Mehmet Akif, Yahya Kemal, Necip Fazıl and Nazım Hikmet and worked on an anthology consisting of short stories of Turkish authors in 1970.

He came to Ankara in 1970 and started lecturing at Ankara University. In 1972 he married pharmacist Füsun Bilgiç, who is the mother to his three children. After completing his doctorate at the Faculty of Sciences in 1974, he went to Exeter University in the U.K. to further his studies.

In 1980, with the reference of the OIC, he was made chair of the Research Centre for Islamic History, Art and Culture (IRCICA). He resumed his duty for 25 years establishing a grand library with Turkish and Islamic culture archives. In 1984 he became professor at the Istanbul University Faculty of Science. He is the founder of the department of History of Science at this university. A few of his publications include, "The West and Islam" (1999), "A Glimpse into the Past" (1987), "The Turks in Egypt and Their Cultural Heritage."
Last Update: Aug 09, 2014 10:18 am
RELATED TOPICS