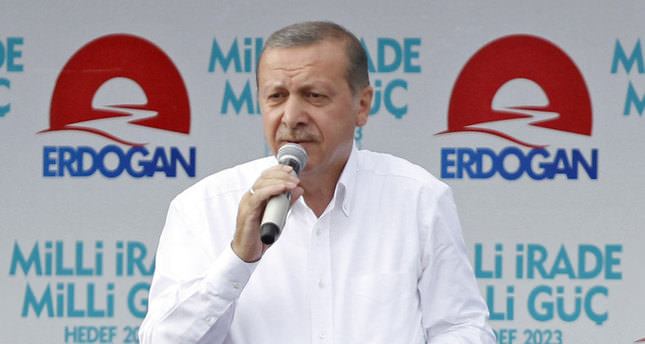 by Daily Sabah Aug 09, 2014 12:00 am
Presidential candidate and Prime Minister Recep Tayyip Erdoğan on Saturday, addressed tens of thousands of supporters in Konya , a central Turkey city , holding his final campaign rally before the presidential election.

"This might be my last speech as a prime minister and chairman of AK Party . God willing a strong Turkey will rise from its ashes once again as you elect the people's president tomorrow." he said in his speech.

Before Erdoğan's speech, FM Davutoğlu addressed the crowd and said "Tomorrow Turkey will not only elect the president of Turkey, but also of the oppressed people in the Muslim world. People in Palestine, Bosnia say that the elections in Turkey concern them too, they are praying for Turkey. "

During the rally, Prime Minister Erdoğan surprised the crowd by making a live video connection, screening President of Bosnia and Herzegovina Bakir Izetbegović along with Bosnian supporters of Erdoğan.   President Izetbegovic said " Erdoğan carries the flag once carried by Aliya Izetbegovic during the Bosnian war. Erdoğan has showed us how a great leader is just like our dear leader Aliya . All the Muslims around the world pray for you. My brothers and sisters in Turkey, we want you to know that Bosnia loves you."

Turkey, for the first time in its history, will directly elect its president on Sunday. Recent surveys show that PM Recep Tayyip Erdoğan is expected to win the elections in the first round.