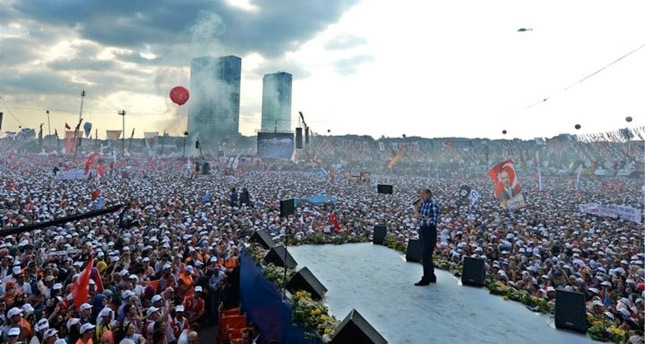 For the first time Turkey is directly electing its president in a contest considered to be a turning point, with PM Erdoğan the strong favorite for a job he has pledged to transform from a symbolic role into one of real power

Prime Minister Recep Tayyip Erdoğan is widely recognized as the front-runner in the race to replace Abdullah Gül as Turkey's president with the historic election around the corner. Other candidates are Ekmeleddin İhsanoğlu, former chief of the Organization of Islamic Cooperation (OIC), and pro-Kurdish politician Selahattin Demirtaş.

Turkish citizens vote Sunday in the country's first direct presidential election. Presidents were previously elected by Parliament apart from former Gen. Kenan Evren who was elected to the post in a 1982 referendum, two years after he took power in a military coup. Some 53 million people are eligible to cast votes in more than 160,000 polling stations across the country. Close to 2.8 million expatriate Turks in 54 countries had the opportunity to cast early votes between July 31 and Aug. 3 at Turkish diplomatic missions abroad. However, less than 250,000 people registered to do so. On election day Turks are prohibited from carrying fire arms or selling alcohol in a bid to minimize the risk of violence. Media outlets are barred from publishing opinion surveys in the 10 days leading up to the elections to prevent such polls from influencing voter decisions. Turkey has no official exit polls and it is prohibited to publish election results until the Supreme Election Board lifts that ban, usually a few hours after the polls close. Large media outlets deploy reporters at each of the polling stations that send results of the vote count back to their headquarters. Political party officials at polling stations also keep their own tallies.

Initial results often vary between the outlets, causing confusion until the electoral board announces the provisional results, scheduled for Aug. 11. The final, officials results are expected on Aug. 15. If no candidate wins an outright majority on Aug. 10, runoff elections between the two top contenders will be held Aug. 24 when a plurality of votes will suffice. Critics say the election campaign has been lopsided in favor of Prime Minister
Recep Tayyip Erdoğan.
RELATED TOPICS