All presidential candidates cast their votes 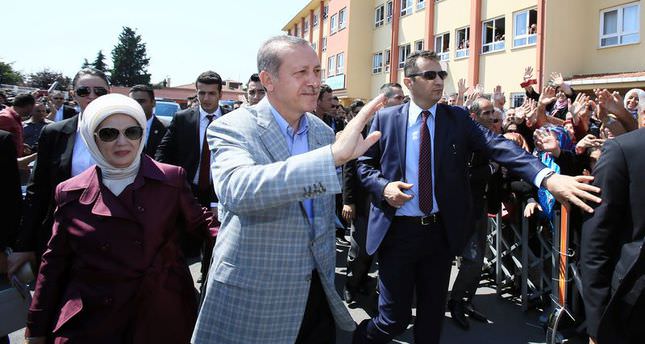 by Daily Sabah Aug 10, 2014 12:00 am
As millions of Turkish citizens are casting their votes to elect the nation's president, the three presidential candidates have alrady voted, sending different messages to the nation in Turkey's first ever popular presidential elections on Sunday.

People's Democratic Party's (HDP) candidate Selahattin Demirtaş has voted in Turkey's southeastern province of Diyarbakır and has stated that Turkey has taken a significant step in politics. Moreover, he expressed that Turkey's efforts for a better democracy will continue regardless of who wins the elections and "the fight for democracy will continue".

Ekmeleddin İhsanoğlu, who is the 70-year-old former head of the Organization of Islamic Cooperation and the opposition's joint presidential candidate cast his vote in Sarıyer district in Istanbul. He also expressed that Turkey is striving to become a first-class democracy while he stated he will file legal action against ballot box officers who did not confiscate people's cell phones during the voting process and let them take pictures, violating electoral rules and regulations.

AK Party's presidential candidate Recep Tayyip Erdoğan on the other hand voted in Üsküdar district of Istanbul amidst a crowd of people who gathered in front of the school where Erdoğan voted to see him. His wife Emine Erdoğan and children accompanied him as he cast his vote and Erdoğan highlighted the fact that it is the first time people are able to choose their president without mediators. "We are making a significant decision for our future today" said Erdoğan, who expressed that he hopes the elections will benefit the Turkish nation and democracy.

More than 53 million citizens are eligible to vote in the election, while about 240,000 Turks throughout the world have already voted at voting stations set up by Turkey's Supreme Board of Elections (YSK).