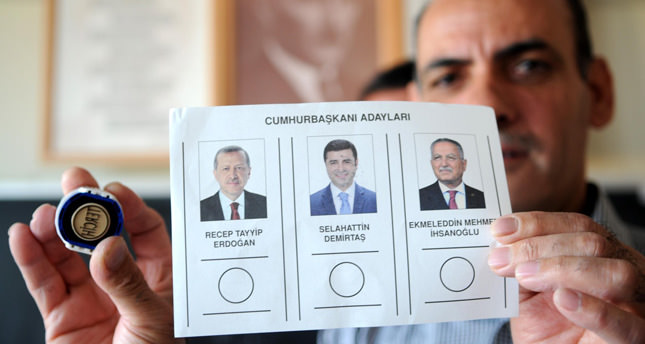 by Associated Press Aug 10, 2014 12:00 am
Turks voted Sunday in their first direct presidential election, a watershed event in the country's 91-year history that could cement Prime Minister Recep Tayyip Erdoğan's position as Turkey's most influential leader.

Erdoğan, who has dominated Turkish politics for more than a decade, is the strong front-runner to replace incumbent Abdullah Gül for a five-year term.

Polls closed Sunday afternoon but official provisional results were not expected until Monday. The state-owned news agency Anadolu was scheduled to report unofficial results as soon as the country's electoral board lifts a ban on reporting the outcome of the vote late Sunday.

"The people are making an important decision ... for Turkish democracy, for the future of our country," Erdoğan said after casting his ballot on the Asian side of Istanbul, the country's largest city.

Now in his third term as prime minister at the head of the Justice and Development Party, or AK Party, Erdoğan has been a polarizing figure. He is fervently supported by many as a man of the people who has led Turkey through a period of economic prosperity.

Some 53 million people are eligible to vote; an absolute majority is needed to win. Otherwise, the top two candidates go to a runoff on Aug. 24. Erdoğan, whose party won the local elections in March with about 43 percent of the vote, is widely expected to be elected, although it is unclear if he can avoid a runoff.

Turkish presidents used to be elected by parliament but the procedure has been changed to a popular vote.

Previously a largely ceremonial role, Erdoğan has vowed to transform the presidency saying he will activate the post's rarely used dormant powers a legacy of a 1980 coup including the ability to call parliament and summon and preside over Cabinet meetings.

Erdoğan's main challenger is Ekmeleddin Ihsanoğlu, a 70-year-old academic and former head of the Organization of Islamic Cooperation who is backed by several opposition parties including the two main ones: a pro-secular party and a nationalist one.

"The eyes of the whole world are upon us," Ihsanoğlu said after voting in Istanbul. "(Turkey) has been striving to become a first-class democracy ... and hopefully Turkey will achieve this today."

Asa Lindestam, head of a group of election observers from the Organization for Security and Cooperation in Europe, said voting at the few polling stations she had monitored had proceeded "smoothly."