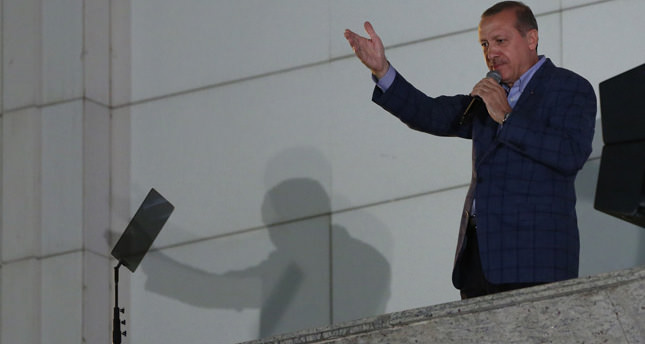 by Daily Sabah Aug 11, 2014 12:00 am
President-elect Recep Tayyip Erdoğan came to Ankara to address the nation as president of Turkey, after following the election results in his home in Istanbul. After a brief thank you in Istanbul, Erdoğan saluted the tens of thousands of supporters in front of the AK Party headquarters in Ankara and the nation watching his speech live from their homes.

Recep Tayyip Erdoğan congratulated the nation on the first ever presidential election by popular vote and stated that the will of the people was the real winner of the election.

Erdoğan reassured the nation that he was the president of the whole nation, not just of those who voted for him. He affirmed that despite all differences in culture, ethnic background, sect and religion he welcomed the whole nation and hoped to walk towards the 2023 vision all together, stating that Turkey was now entering a new era with the obstacles between the state and the people being abolished.


"Today we are closing an old and opening a new era", said Erdoğan.

"Let us start a communal reunification" said Erdogan which was notable as it was interpreted as extending an olive branch to those that did not support his presidency.

Recep Tayyip Erdoğan did not forget the nations who sent their support and prayers, including the people of Gaza Syria and Bosnia as he said "Today, not only Turkey, but Beirut, Sarajevo, Skopje, Damascus, Aleppo, Jerusalem are the winners of this election." Erdoğan will serve a five-year term as president and will be eligible to stand as candidate for another term. Erdoğan's presidency will start as of August 28. Erdoğan's speech was translated to Arabic and English.
Last Update: Aug 11, 2014 9:07 am
RELATED TOPICS