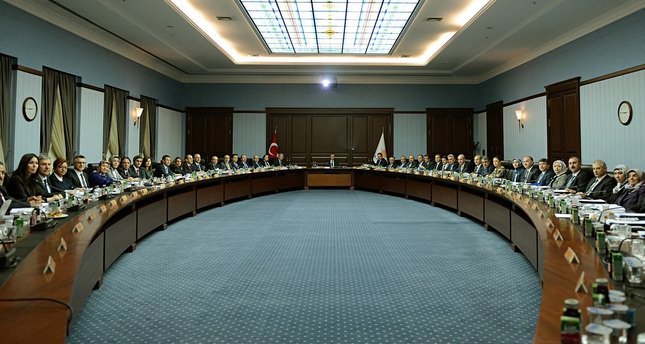 by AA Aug 11, 2014 12:00 am
Turkey's ruling Justice and Development Party's executive board will meet Monday, a day after Prime Minister Recep Tayyip Erdoğan triumphed in the presidential election.

The Justice and Development Party, commonly referred in Turkey as the AK Party, is looking for a new leader, as Erdoğan will have to resign from the party leadership when he is sworn in as president on Aug. 28.

Earlier, Deputy Prime Minister Bülent Arınç said a "road map" for selecting the party's new leader might be set during the executive board meeting Monday.

Turkish press outlets are reporting that the next prime minister could be current Foreign Minister Ahmet Davutoğlu or former Minister of Transport, Maritime and Communication Binali Yıldırım.

Having been elected in the first direct presidential election in Turkey's history, Erdoğan, who secured 51.96 percent of the votes Sunday, has said the next prime minister and the next party leader will be the same person.

Erdoğan, who was elected to a five-year term, will be taking over the post from President Abdullah Gül.

Erdoğan has been Turkey's dominant political figure for more than a decade. After helping to found the AK Party in the early 2000s, his party has won three local elections, three general elections and two referendums in the last 12 years.