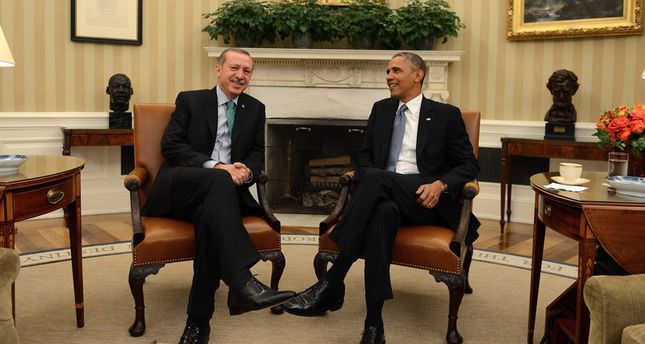 by Ragıp Soylu Aug 12, 2014 12:00 am
President Barack Obama today congratulated Prime Minister Recep Tayyip Erdoğan on his election as the 12th President of Turkey, praising Erdoğan's speech on Sunday and noting that Erdoğan has a historic opportunity to further move Turkey forward.

The White House said that President Obama and Prime Minister Erdoğan agreed on the importance of close cooperation on Syria and Iraq and the terrorist threat "emanating" from the region. Obama welcomed Turkey's humanitarian aid to vulnerable Syrians and Iraqis and agreed with Erdoğan on the need to ensure that cooperation continues. Leaders also discussed cease-fire efforts in Gaza.

The last phone conversation between the two leaders took place on Feb. 20. Since then, Turkey's strong criticism regarding Israel's severe actions in the Gaza Strip and Turkey's intense cooperation with the Kurdistan Regional Government in Iraq by selling off her oil resources has disturbed Washington more. Turkey also felt betrayed by the Obama administration for "mishandling" the civil war in Syria, especially after the U.S. removed military action against Damascus from the agenda last September.

"In the past, I was calling Obama directly. Because I can't get the expected results on Syria, our foreign ministers are now talking to each other. And I have talked to [U.S. Vice President Joe] Biden. He calls me and I call him," Erdoğan said in a live interview on channel ATV last month.