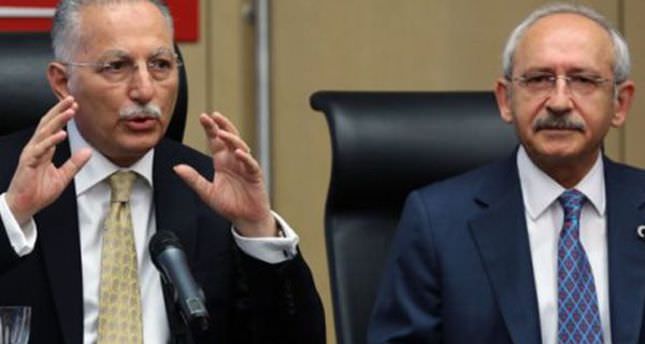 by Daily Sabah Aug 12, 2014 12:00 am
CHP leader Kılıçdaroğlu said he has no regret in nominating Ekmeleddin İhsanoğlu as a presidential candidate. MHP leader Bahçeli, İhsanoğlu's other sponsor, blamed the defeat on those who failed to vote. İhsanoğlu, meanwhile, congratulated Erdoğan and said he didn't consider himself defeated.

While the enthusiasm and celebration dominated AK Party supporters and members, Turkish opposition was defeated in Sunday's election. Turkish main opposition parties, the Republican People's Party (CHP) and Nationalist Movement Party (MHP), came to a significant agreement by choosing Ekmeleddin İhsanoğlu as their joint candidate, although İhsanoğlu was only able to receive 37 percent of the votes in Sunday's election.

Commenting on the election results, CHP leader Kemal Kılıçdaroğlu yesterday stated that the joint candidate and the policies towards the election were correct. "If there had been an election today, I would have announced İhsanoğlu as CHP's candidate again. Today, Turkish politics gained a new and clear name with İhsanoğlu. İhsanoğlu is a new actor with his experience and discourse in Turkish politics," said Kılıçdaroğlu.

Kılıçdaroğlu also said that any intraparty conflict within the CHP is not expected after the election results. Speaking after the election results, MHP leader Devlet Bahçeli made harsh remarks regarding the election, slamming citizens who did not go to the ballot box. Bahçeli said, "Those who refrain from going to the ballot box for the sake of country, flag, state will be also accountable for the upcoming negativity [in the country.]"

Highlighting that the MHP is respectful of the nation's decision, Bahçeli harshly remarked that on Sunday's election, honesty and justice lost. İhsanoğlu congratulated Erdoğan and wished him success, in a concession speech in Istanbul late Sunday. He said, "Dear friends, I received about 39 percent of the votes and this is crucial as about a month ago when we first started our election campaign people claimed that nobody knew about me."
Last Update: Aug 12, 2014 12:05 pm
RELATED TOPICS