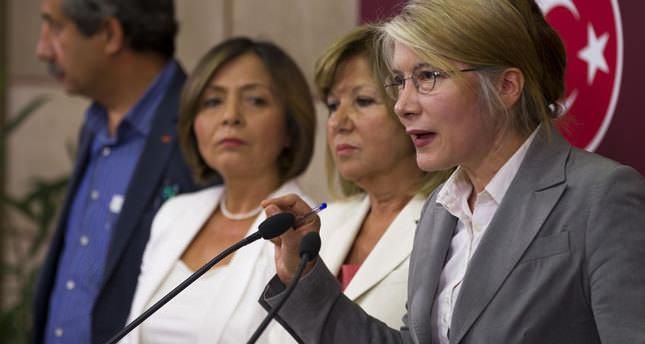 After PM Erdoğan's presidential election victory, many parliamentarians from the main opposition Republican People's Party (CHP) demanded Kemal Kılıçdaroğlu step down from the party leadership and requested an immediate congress to elect a new chairperson

Election defeat sparks a crisis within the main opposition CHP, with Kemalist holdouts calling for the resignation of party leader Kemal Kılıçdaroğlu. CHP's Ankara deputy Emine Ülker Tarhan, in a press conference with her associates, openly called for a convention to elect a new leader while the party's chief whip Muharrem İnce took to Twitter to declare the presidential election result as a "major defeat."

In last Sunday's presidential election the Justice and Development Party's (AK Party) presidential candidate Recep Tayyip Erdoğan won the elections with 51.65 percent of the vote, making him Turkey's first ever president to be chosen by popular vote. The opposition parties' joint candidate İhsanoğlu won 38.57 percent of the vote and this result sparked an intra-party conflict among the members of the main opposition CHP.

CHP deputy and party whip Muharrem İnce defined election results as "a major defeat" and said that he will not sit and watch his party melt away. "There is certain defeat and remaining silence does not help. We cannot accept or avoid this reality," İnce posted on his Twitter account.

Furthermore, Ankara deputy Emine Ülker Tarhan called on CHP chairman Kemal Kılıçdaroğlu to resign and gather an extraordinary congress. "Chairman Kılıçdaroğlu and his team should cease accusing voters and should display virtue by withdrawing from their positions and go to the convention," Emine Ülker Tarhan said at a press conference on Aug. 12 at the Turkish Parliament in conjunction with other dissident Kemalist hardliner parliamentarians, Istanbul deputy Nur Serter, İzmir deputy Birgül Ayman Güler, Eskişehir deputy Süheyl Batum, Uşak deputy Dilek Akagün Yılmaz and Mersin deputy İsa Gök. "This understanding of opposition has come to an end. The CHP tried to be like the others and lost.

From now on, it will either draw a new road map or continue to deceive itself," she added. Tarhan also called on the party to arrange an immediate meeting and to consider the party's future on the eve of the 2015 parliamentary elections, noting that it would be a fight for survival while imploring them to take the responsibility of putting the CHP back on the path to power.

The first response to dissident parliamentarians came from deputy chairman Bülent Tezcan: "The party's voter base does not want to gather an extraordinary convention." Tezcan also challenged dissidents and said that they can call a convention if they collect 586 signatures from party delegates. According to the CHP's charter, one-fifth of the total delegates need to collect signatures to call for an extraordinary congress.

However, it seems difficult due to the fact that the majority of delegates are loyal to chairman Kılıçdaroğlu. Regarding this issue, Kılıçdaroğlu said earlier that he was not closed to the idea of gathering an extraordinary congress; however, he added there was no need for it.

According to veteran journalist Avni Özgürel, the fragmented structure of the CHP was revealed with İhsanoğlu's candidacy and that deputies were hushed until the election results were announced. Özgürel believes that the deputies, who are discontented with the result of the presidential election, will not be able to collect enough signatures to gather an extraordinary congress. "I also believe that an attempt to constitute a new party would fail while parliamentary elections are 10 months in the future." he added.

Mustafa Altınoğlu, a political scientist from Anatolia University stressed the common point of CHP deputies in their remarks about the election results. "Their common point is the discontentedness of the CHP's identity of being rubbed away. While calling upon to be loyal for the basic tenets of the Republic and universal principles of the left, they think that the party's opening efforts for the right cost too much for the leftist identity of the CHP." According to Altınoğlu, following a hardliner Kemalist pattern under current conditions would not bring an election victory for the CHP. The deputies prioritize preventing Republican tenets from being rubbed away instead of being the political power. "In order to protect their positions in the party, they trump with widespread hardliner Kemalism sensitivities in the sociological basis. Namely, they can legitimize their existence by undertaking this role of representatives of these sensitivities … This situation however, is not sufficient for them to be an alternative. Instead, they lose election by election, condemned to an ill fate," he said.

The Nationalist Movement Party (MHP), chaired by Devlet Bahçeli, and as the faction that suggested İhsanoğlu as the joint candidate to the CHP still seems calm. According to political scientist Orçun Ersay from Galatasaray University, the reason lies behind why the MHP does not face similar conflict, is the tripartite balance of power composed of the leader, the party organization and the doctrine, which is still strong.

According to Political Scientist from Gazi University and columnist Hüseyin Yayman this intra-party conflict will not lead changes to replace chairman Kılıçdaroğlu. ''This conflict will lead to a very tense debate in CHP but I assume that Kılıçdaroğlu will keep his position.'' Yayman also believes that CHP needs to assess this election result seriously otherwise they will face with greater election defeat in 2015.