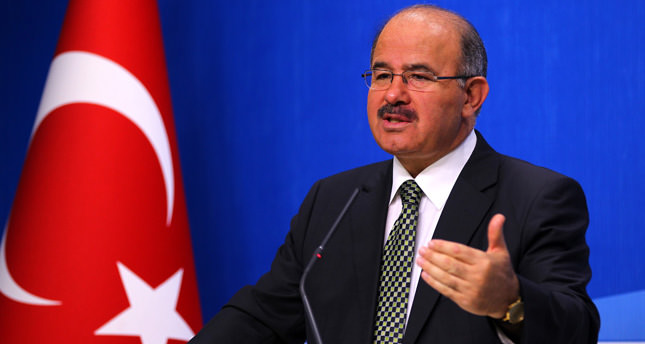 by Daily Sabah Aug 12, 2014 12:00 am
AK Party's Central Decision-Making and Administrative Committee (CDAC) convened for a historic meeting on Monday, a day after AK Party Chairman Recep Tayyip Erdoğan was chosen as the country's first directly-elected president on Sunday. President-elect Erdoğan chaired the executive board meeting and election results, while a roadmap for the future of the party was discussed in the closed-door meeting.

After a two-and-a-half-hour meeting, AK Party spokesperson Hüseyin Çelik announced that the AK Party's executive board decided to gather an "extraordinary congress" on Aug. 27 to elect the party's next chairman, who will also be Turkey's next prime minister. Even though Çelik stated that the AK Party's executive board has not decided on a candidate, certain political circles believe that Foreign Minister Ahmet Davutoğlu is the most likely candidate.

Meanwhile the outgoing President Abdullah Gül signaled his return to the AK Party. "I'll be back to my party after the end of my term. It's a natural thing." The presidential election results and the reasons for the low turnout rate were discussed in the meeting. The AK Party's executive board decided to look closely at the provinces that received lower support than expected.

According to Çelik, seasonal workers and holidaymakers are the groups whom are responsible for the relatively low turnout. "In this election, the total turnout was about 73 percent, [which] may be considered normal for democracies, and well enough compared to democratic nations," Çelik added. Çelik also ruled out the possibility of nominating more than one candidate in the upcoming congress. "I don't think that there will be more than one candidate in the congress. The established practice of the AK suggests that," Çelik added. The fight against the Gülen-affiliated infiltration headed by controversial U.S.-based imam Fethullah Gülen - which tried to topple the government in the Dec. 17 operation with its members that had infiltrated the police and judiciary - was also on the agenda, and the executive board decided to continue their decisive stance against the organization.

Turkey's Supreme Election Board (YSK) is expected to give Erdoğan his certificate of election this week, and President-elect Erdoğan is expected to serve as prime minister until Aug. 28 when the transition ceremony will be held.
Last Update: Aug 12, 2014 10:31 am
RELATED TOPICS