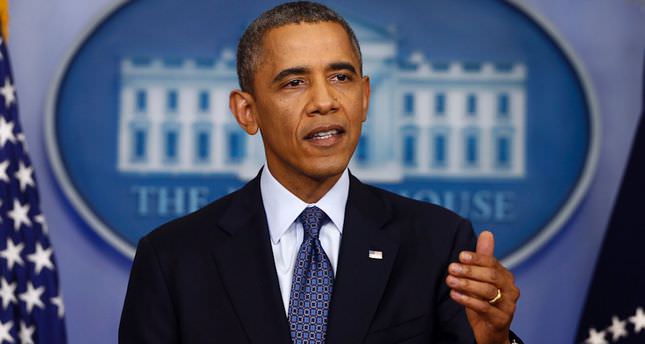 by Daily Sabah with Agencies Aug 12, 2014 12:00 am
President Obama looks forward to working with Erdoğan in his new role and with whomever succeeds him as the next prime minister, Whitehouse national security spokeswoman Caitlin Hayden said yesterday. EU leaders were among those who congratulated Erdoğan.

Many of Prime Minister Recep Tayyip Erdoğan's European and regional counterparts congratulated him on winning the election for Turkey's presidential seat yesterday and underscored the country's pivotal role in the troubled region. "President Obama looks forward to working with Prime Minister Erdogan in his new role and with whomever succeeds him as the next Prime Minister," Whitehouse national security spokeswoman Caitlin Hayden said.

Congratulating Erdoğan on Monday, German Chancellor Angela Merkel said, "We are currently facing difficult challenges in the region. Turkey has a major role to play in this context. I wish you success, endurance and strength for these weighty tasks." Merkel noted the "close ties based on trust" between Turkey and Germany given her country's 3-million-strong population with Turkish roots. "It is personally important to me to, together with you, to maintain and strengthen the traditionally friendly relations between our two countries in the interest of our citizens."

The EU on Monday called Erdoğan to play a conciliatory role in Turkey, a day after he won the Turkish presidency after one round of voting. "We congratulate you on your election as president of the Republic of Turkey," EU council president Herman Van Rompuy and EU Commission head Jose Manuel Barroso said in a joint statement.

"As you rightly underlined yourself, we trust you will maintain the conciliatory role which your new position involves, and strive to encompass all communities, beliefs, sensitivities, opinions and lifestyles of the Turkish society," the top EU officials said. Van Rompuy and Barroso said, "Turkey is a key partner for the EU: a candidate country negotiating EU accession, a neighbor, an important trade partner and a foreign policy ally." They added that the EU looked forward to Erdoğan's "continued support to the current process aiming at a settlement of the Kurdish issue, in which you have already invested valuable efforts and on your continuing support to reach a settlement in Cyprus."

In a statement on its website, the Egypt's Muslim Brotherhood congratulated the Turkish leader and wished him luck in his new post. The group went on to note that ousted Egyptian president and Brotherhood leader Mohammed Morsi had also congratulated Erdoğan through his office. Furthermore, the Palestinian resistance faction Hamas, described Erdoğan's electoral win as "a victory for Gaza, Jerusalem and Ramallah, and all Palestine."

Tunisia's Ennahda movement has congratulated Erdoğan on his victory in Sunday's presidential election. "We congratulate our brother Erdoğan on his victory in the Turkish presidential elections from the first round, and we wish Turkey and its people all the luck, security and prosperity under Erdoğan's rule," Ennahda leader Rachid Ghannouchi said on his official Facebook page.

Azerbaijan's President Ilham Aliyev greeted Erdoğan on his victory with a phone conversation on Sunday night, according to a statement issued on Azerbaijan's presidency website. The two leaders expressed their wishes for further developing the bilateral relations in the future, the statement added.
Last Update: Aug 12, 2014 9:17 am
RELATED TOPICS