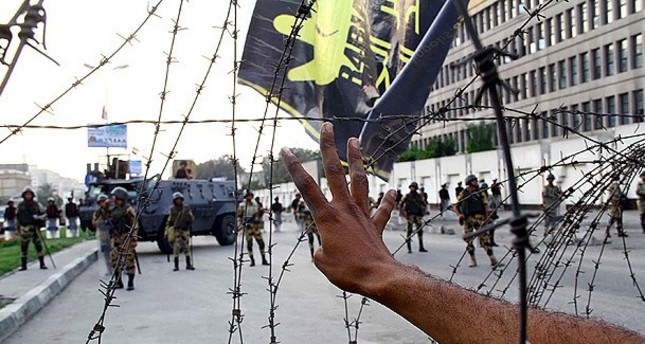 by Daily Sabah Aug 12, 2014 12:00 am
World Rabaa Day will be held on Thursday to commemorate the "massacre" of hundreds of Muslim Brotherhood supporters by the Egyptian military regime a year ago, the International Rabaa Platform has declared.

Former Egyptian President Mohammed Morsi was ousted by the military in July last year when the month-long sitin protest at Rabaa al-Adawiya Square and al-Nahda Square in Cairo were attacked by security forces, resulting in 638 deaths.

Activist Cihangir İşbilir said on Tuesday: "We declared Aug. 14 as World Rabaa Day not only for Egypt and the victims of the Rabaa massacre [but also] to remember all oppressed people in Gaza, Syria, Mosul, Kirkuk and East Turkestan." Worldwide protests will be held a year on to support the Egyptian pro-democracy struggle, he said.

A ship named Rabaa will leave Istanbul's Karaköy harbour at 1:00 p.m. GMT on Thursday, stopping at ten Bosphorous ports. The International Rabaa Platform will hold an exhibition in Istanbul's Taksim district in cooperation with The Anadolu Agency (AA). The six-day exhibition will include 140 photos from all over the Islamic world.

İşbilir added that "Anadolu was the only agency to broadcast live from Rabaa al-Adawiya Square. The Agency has played an important role in raising the voices of oppressed people by broadcasting live from Gaza, Syria and Iraq."

The face of the 17-year-old Asmaa al-Beltagi, daughter of Muslim Brotherhood leader Mohamed al-Beltagi, will be on banners to commemorate the
victims. She was killed during the Rabaa protest.

The image of Palestinian Ansam Junaid tearfully kissing the face of her dead brother, killed in an Israeli attack on Gaza two weeks ago, will also decorate banners.

According to the Egyptian Health Ministry, 638 people were killed on Aug. 14 - 595 civilians and 43 police officers. Nearly 4,000 were injured. The Muslim Brotherhood and the National Coalition for Supporting Legitimacy claimed the death toll at Rabaa al-Adawiya alone was around 2,600.
Last Update: Aug 12, 2014 11:49 pm
RELATED TOPICS