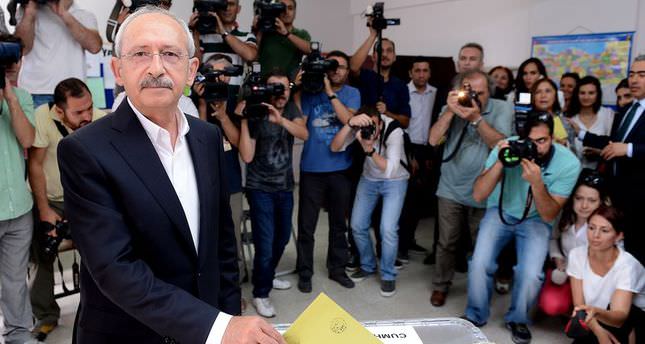 CHP leader Kılıçdaroglu criticized party members calling for his resignation, challenging them to seek support for a convention

The main opposition Republican People's Party (CHP), which is constantly shaken by intra-party conflicts, has entered another troubled period after their failure in presidential election. Party leader Kemal Kılıçdaroglu harshly criticized deputies who are calling on him to immediately resign. In last Sunday's presidential election, the Justice and Development Party's (AK Party) presidential candidate, Recep Tayyip Erdoğan, won the election with 51.8 percent of the vote, making him Turkey's first-ever president to be chosen by popular vote. The opposition parties' joint candidate, Ekmeleddin Ihsanoğlu, won 38.6 percent of the vote, and this result sparked an intra-party conflict among members of the CHP.

Speaking to the Cumhuriyet daily on Wednesday, Kılıçdaroğlu described the intra-party opposition, led by Ankara deputy Emine Ülker Tarhan, as people with sick mindsets, adding, "The CHP's grassroots is uneasy with their roaring. I should state with sadness that I am the one who brought most of these colleagues into politics. If a mistake is to be sought, then the mistake should be sought with me as the person who brought them [to the party]."

Six CHP deputies called for the resignation of the party leader following İhsanoğlu's defeat in the presidential election, as Prime Minister Erdoğan swept the majority of the votes in Sunday's polls. A day after resignation calls, Kılıçdaroğlu stated that he made a significant mistake by bringing these figures into the party. "They are not the ones who brought me to the leadership of the CHP, why should I have to resign at their request. It is written in our charter under what conditions a congress can be assembled. If they are strong enough to collect a sufficient number of signatures, I am here to be challenged by them," Kılıçdaroğlu said.

CHP deputy and party whip Muharrem İnce defined the election results as "a major defeat" and said that he will not sit and watch his party melt away. "There is certain defeat and remaining silent does not help. We cannot accept or avoid this reality," İnce posted on his Twitter account. "Chairman Kılıçdaroğlu and his team should cease accusing voters and should display virtue by withdrawing from their positions and go to the convention," Tarhan said at a press conference on Tuesday in Parliament in conjunction with other dissident Kemalist hardliner parliamentarians, Istanbul deputy Nur Serter, İzmir deputy Birgül Ayman Güler, Eskişehir deputy Süheyl Batum, Uşak deputy Dilek Akagün Yılmaz and Mersin deputy İsa Gök. "From now on, it will either draw a new road map or continue to deceive itself," she added. Tarhan also called on the party to arrange an immediate meeting and to consider the party's future on the eve of the 2015 parliamentary elections, noting that it would be a fight for survival while imploring them to take the responsibility of putting the CHP back on the path to power.

Kılıçdaroğlu, who has continuously faced intra-party conflicts since he took the leadership from Deniz Baykal, failed to convince party members to establish a democratic structure in the CHP. In the early days of his party leadership, he promised that he would constitute a democratic structure in the CHP, instead of one-man parties and added that the "CHP will become a cadre movement."

Nominating İhsanoğlu as joint presidential candidate of the opposition parties by the CHP also caused a great disturbance among the neonationalist segment of the CHP that found former Organization of Islamic Committee (OIC) chairman İhsanoğlu not suitable for the principles of the CHP. The defeat in the Aug. 10 presidential election was the final straw for dissident groups in the CHP, who now openly call for an extraordinary congress to convene to elect a new leader.
Last Update: Aug 14, 2014 3:50 pm
RELATED TOPICS