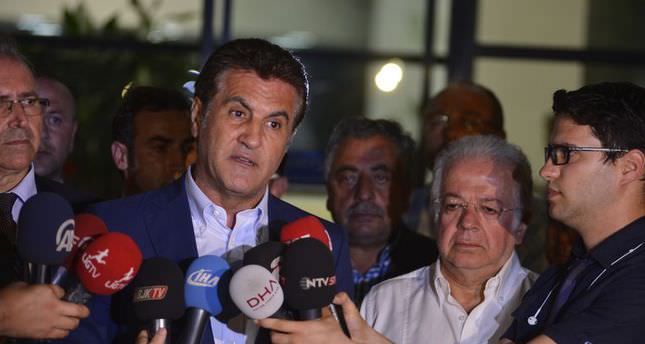 by Daily Sabah Aug 14, 2014 12:00 am
Mustafa Sarıgül, former mayor of Istanbul's Şişli district and the former mayoral candidate for Istanbul from the Republican People's Party (CHP) in the last local elections, criticized the low votes in Istanbul that CHP and Nationalist Movement Part (MHP) joint candidate Ekmeleddin İhsanoğlu received in the presidential election.

Sarıgül said that he had received more votes in the March 30 local elections than İhsanoğlu did in his presidential run in which Prime Minister Recep Tayyip Erdoğan reached over the 50 percent threshold.

While disputes between chairs of the CHP remain after the presidential election, the chairman candidate in the 2005 CHP special general assembly, Sarıgül is among those dissidents in the party. In the speech he made on Wednesday, after an opening ceremony in Kırklareli, Sarıgül evaluated the results of the last presidential election. "Come to think of it, 14 parties got together in Istanbul but did not receive the amount of votes we got in the March 30 local elections. We lost these huge elections in Istanbul only by a slight difference of 3 percent," he said and noted that they need to work harder because if they work and plan, "something is going to change."

Sarıgül is a well-known dissident figure due to several events during his membership in the CHP. Internal rivalry in the CHP began when he and former CHP leader and current Antalya parliament member Deniz Baykal had a dispute, which resulted in Sarıgül's resignation in 2004 after accusations of corruption and abuse of authority.

The rivalry flared up again when Sarıgül was nominated as the CHP's mayoral candidate for Istanbul in the March 30 local elections when Istanbul's Bakırköy district Mayor Ateş Ünal Erzen was attacked by Sarıgül at a CHP conference. Due to this history, he was later expelled from the party in 2005. Though he founded Turkey's Change Movement in 2009, he returned to the party in 2010 and cooperated with new chairman Kemal Kılıçdaroğlu.

Sarıgül received 40 percent of the vote in Istanbul in the 2014 local elections but lost against AK Party candidate Kadir Topbaş.