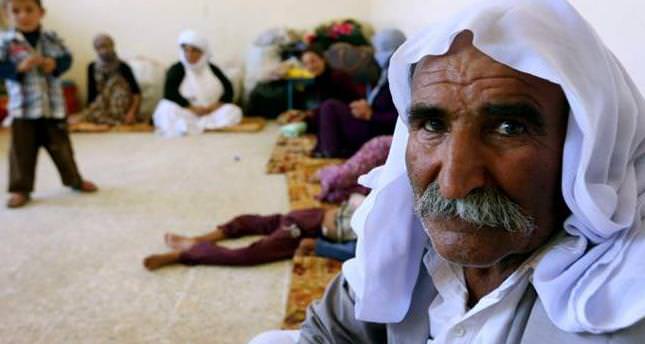 by Daily Sabah Aug 14, 2014 12:00 am
Turkey continues to host Yazidis who have fled from attacks by the Islamic State of Iraq and al-Sham (ISIS) in their homelands. President-elect Recep Tayyip Erdoğan's Chief Advisor İbrahim Kalın yesterday announced on his Twitter account, "As of today, around 2,000 Iraqi Yazidis have entered Turkey." Kalın stated that via 103 humanitarian trucks, the Prime Ministry's Disaster and Emergency Management Directorate (AFAD), the Turkish Coordination and Cooperation Agency (TİKA), municipalities and NGOs delivered aid to Sinjar, Kirkuk, Tal Afar, Irbil, Dohuk and Tall Kayf. It is reported that the Health Ministry delivered 441,539 medications, while AFAD delivered food aid for 41,000 people, tents for 12,500 people, 2,000 kitchen appliances and 1,920 beds. According to official figures, TİKA, together with AFAD, delivered food and hygiene aid for 3,000 families to Tall Kayf and its surrounding area and 450 air conditioners to Khazer Camp. The Turkish Red Crescent also delivered food aid, clothes, beds and tents to needy people in Iraq. Turkey now hosts 2,000 people from Iraq's Yazidi minority who took shelter in southeastern Turkey after fleeing violence in their homeland. Some members of the group that survived a troublesome journey underwent medical examinations in the Turkish province of Şırnak where they are being accommodated.