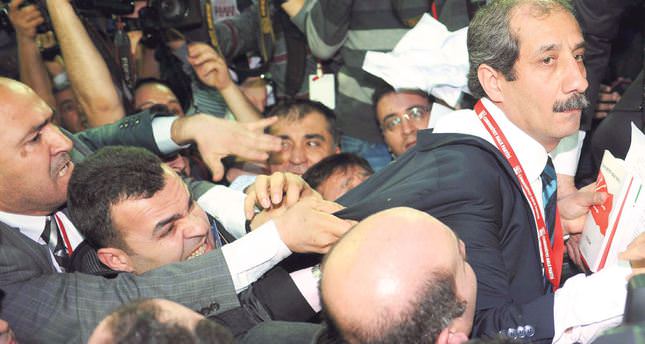 Erdogan's election to the presidency split the opposition CHP while the ruling AK Party, which will replace its chairman, is exhibiting a united front at a time of significant change

The Presidential election on the Aug. 10 became the culmination of the decade-long success by the ruling Justice and Development Party (AK Party), which had its chairman, Recep Tayyip Erdogan, elected as Turkey's next president. For the opposition Republican People's Party (CHP), the same election was the nadir of the party's fortunes. As both parties enter a period of change, with the AK Party electing a new chairman and prime minister on Aug. 27 and the CHP deciding to hold a special general assembly to assess what went wrong, the conduct of party members clearly reveals the reasons behind their current state. Within the CHP, there is an obvious split between the leadership represented by chairman Kemal Kılıçdaroglu, who is accused of perpetuating the party's lack of vision, and Kemalist hardliners who want to turn back the clock.

Moderates within the party are calling for reforms, but their message seems to be getting lost in the turmoil. Meanwhile, the discipline and unity within the AK Party, as reflected by the calm assurance of Erdogan that the party's Central Executive Board will meet next Thursday to decide who will be the next chairman and prime minister, showing why the ruling party continues to dominate Turkish politics against rivals divided due to constant infighting.

After losing one election after another, opposing voices are more palpable than ever in the main opposition Republican People's Party (CHP) and the last intra-party conflict - caused by the loss in the presidential election against Prime Minister Recep Tayyip Erdoğan - forced the party leader, Kemal Kılıçdaroğlu, to organize an extraordinary congress to challenge his opponents who demand he leave the chairmanship.

Many opposition voices within the CHP think Kılıçdaroğlu's planning of an extraordinary congress is not enough and demand he leave his position, which they see as a vital matter for the party's future.

Disputes between CHP chairs are have been palpable in the last few days. In return to harsh criticism coming from party members, Kılıçdaroğlu announced his decision for an extraordinary congress and indicated that the date of the congress will be announced in the Central Executive Committee (MYK) that will be held on Sunday.

However on Friday, 50 current and former deputies from the CHP called Kılıçdaroğlu to resign from his post. In their statement, deputies said that the responsibility for their failure in the presidential election is "not voters who did not cast [a vote] but it is Chairman Kılıçdaroğlu, directly."

On Monday, six hard-liner Kemalist deputies led by Emine Ülker Tarhan, the Ankara deputy of the CHP, called for the resignation of the chairman following the CHP and Nationalist Movement Party's (MHP) joint presidential candidate Ekmeleddin İhsanoğlu's defeat in the presidential election. "Chairman Kılıçdaroğlu and his team should cease accusing voters and should display virtue by withdrawing from their positions and go to the convention," said Tarhan and added that "the party lost since it tried to be like the others."

Last but not least, the CHP's group deputy chairman and Yalova deputy Muharrem İnce has also made harsh remarks on the presidential election failure of the CHP and joined the call for going to the congress. "I always said behind closed doors that more than one candidate increases participation and Erdoğan cannot be elected in the first round. Being unable to anticipate it is politically ignorant," said İnce, and indicated that announcing a joint candidate in the first round goes against mathematic reasoning.

As fractioning in the CHP is more visible now, either the planned congress or its possible outcomes in terms of reform in the party is a matter of debate.

Speaking to Daily Sabah, CHP Eskişehir deputy Süheyl Batum stressed that an extraordinary congress is vital for the party's future and this congress will determine whether party members approve of how the party is proceeding or not. "Frankly speaking, we are not successful. We lost since we gave up our principles and tenets for the sake of getting more votes. A party gets vote by means of its program and plights not by trying to resemble others." said Batum and added that the congress will show the moment of truth.

Among the 50 dissident former deputies, the CHP's former deputy of Manisa, Şahin Mengü pointed out that "obliqueness exists inside the party" and it has to change urgently. Mengü told Daily Sabah that "though he is hanging around as a triumphant commander now, I do not take serious what Kılıçdaroğlu said even for the congress. As a matter of fact, he broke his word many times before," and added, "The problem is the mindset inside the party became defective and needs to be reformed as soon as possible."
RELATED TOPICS