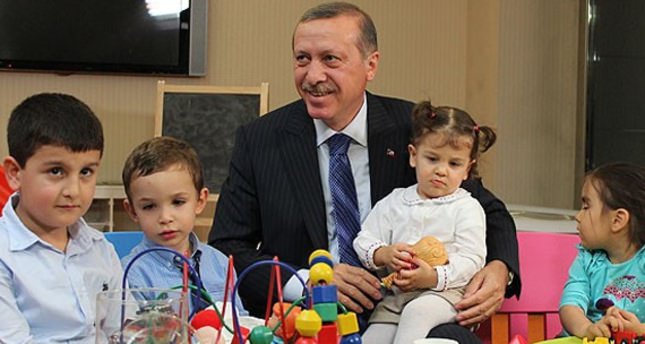 The AK Party aims to change the political landscape of Turkey by saying that a president elected by popular vote will be more active in politics, which is different from previous presidencies. Along with amendments to the presidential election system, different campaign strategies for candidates and social media activities to attract public interest in candidates fell into Turkish citizens' lives.

Contrary to other candidates' traditional public relations strategies and certain routine online PR initiatives, Erdoğan's campaign took a step forward and introduced new means to promote the candidate and create a "presidential brand" in politics by using the power of PR.

Two websites,www.rte.com.tr and www.milletinadami.com ("man of the people" in Turkish), were created for Erdoğan's campaign. The websites are based on Erdoğan's campaign songs, his presidential campaign ads and communication strategies and corporate identity developed for the presidential election. As an interactive incentive, supporters could tag their names on websites to panoramic photos taken during Erdoğan's rallies. Another innovation was also introduced to citizens - the RTE app, which included useful information about the presidential race, Erdoğan's personal life and his favorite poets.

During his electoral campaign, Erdoğan used his social validation as a means to turn his presidential candidacy into social acceptance through strategic PR initiatives. Adopting conciliatory rhetoric compared to previous elections in which he ran, he introduced himself as an inclusive candidate with the slogan "Man of the People."

Erdoğan exerted efforts to impress all segments of society. In July, he invited celebrities to his candidacy announcement and signaled that well-known figures in society supported him in his presidential bid. He took the field and played football with celebrities at the opening of a new stadium. The event depicted him as an individual with a footballer background, rather than a politician addressing citizens in rallies. Erdoğan's photos while visiting citizens' homes for a cup of tea, stroking a cat or embracing a boy who idolizes him, were given to the press.

At his rallies, Erdoğan touched on certain moments that affected him during his political career, such as a girl donating her mother's bracelets to be used in Erdoğan's Istanbul mayoral term and his desire to be buried in Istanbul after his death.

Speaking to Daily Sabah, Optimar research company head and political communication expert Hilmi Daşdemir said that Erdoğan's PR campaign helped him reach out to Turkish citizens easily and get him away from the firm stance that he adopted for years during his political struggle, especially during the Gezi Park protests. Daşdemir said that during the Gezi Park protests, Erdoğan was profiled as a leader who increased tensions across the country due to his harsh remarks, but that image started to erode during the presidential campaign process.

Touching on Erdoğan's background as a politician who grew up in Istanbul's port neighborhood of Kasımpaşa, communications professional Ali Saydam said that his Kasımpaşa background gave him a firm stance in politics and that the nation liked this stance. Saydam added that contrary to his Kasımpaşa background, Erdoğan, in this election campaign, brought to the forefront a sensitive approach to the public.

Erdoğan, who describes himself as a politician combatting the political elites of Turkey that left no space for someone coming from his background, vows to change Turkey's clichéd image of politicians by integrating with the public.
Last Update: Aug 16, 2014 1:01 am
RELATED TOPICS