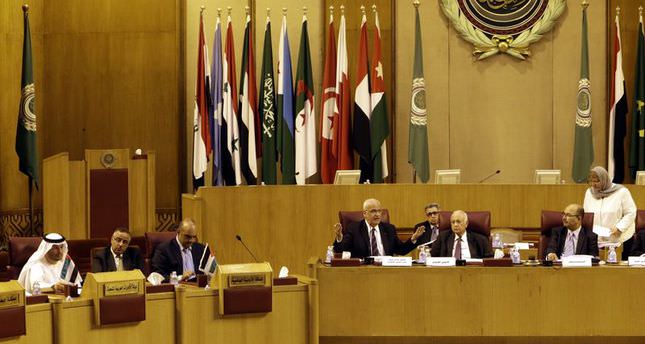 Talks focused on the future of Arab-Turkish relations, means of removing obstacles hindering progress between the two sides and the work needed for holding the sixth session of the Arab-Turkish Forum, which is suspended at present.

Ben Heli said they also discussed means of bolstering cooperation between the Arab League and Turkey.

He added that a date had not been set for holding the sixth session of the Arab-Turkish Forum because "some hindrances are still in place."

The Arab diplomat said a meeting is expected to be held between some Arab foreign ministers and Turkish Foreign Minister Ahmet Davutoğlu on the sidelines of the U.N. General Assembly meetings in September.

He added that the meeting would be a "chance to discuss obstacles and work to resolve differences between Turkey and some Arab states."
Ben Heli said these obstacles must be removed so that an agreement on holding the forum could be reached.

He described his talks with Önhon as "frank" and "clear."

"There is a willingness to review all matters and fix them," he told journalists.

He added that they also discussed means of supporting the blockaded Gaza Strip following the Israeli offensive.

The Israeli offensive left nearly 2016 Palestinians, mostly civilians, dead and more than 10,000 others injured, according to Palestinian health officials.

Thousands of Gaza homes and buildings have also been reduced to rubble by Israel's shelling.

About 64 Israeli troops were also killed in combat with Palestinian fighters, while three civilians were killed by rockets fired from the Gaza Strip, according to official Israeli figures.

Palestinian factions and Israel are currently observing a 5-day truce brokered by Egypt pending indirect negotiations for a durable ceasefire in the Gaza Strip.