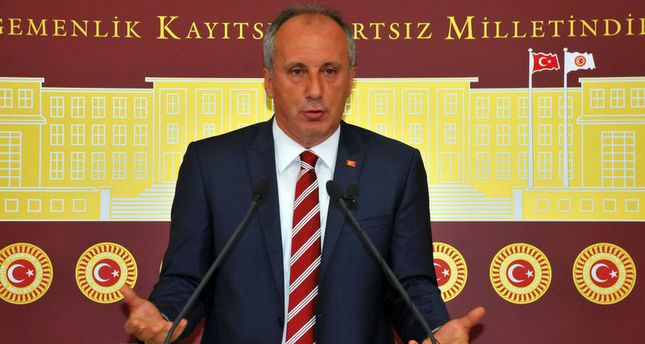 by Daily Sabah Aug 18, 2014 12:00 am
As tensions continue to build within Turkey's main opposition, Republican People's Party prior to the party's extraordinary convention to choose a new leader, Muharrem İnce has announced that he will be running as a candidate to become the new party leader against Kemal Kılıçdaroğlu.

İnce has expressed that he will hold a press meeting at 1pm on Monday to officially announce his candidacy and the extraordinary convention which will take place on September 5-6.

Recently on his Twitter account, İnce has stated that he resigned from his position as CHP's Group Deputy Chairman following Kemal Kılıçdaroğlu's decision to call an extraordinary convention to choose a new leader.

Internal rivalry within CHP hit the climax when CHP's joint presidential candidate Ekmeleddin İhsanoğlu lost the elections and gained less votes than CHP in many regions throughout the country.