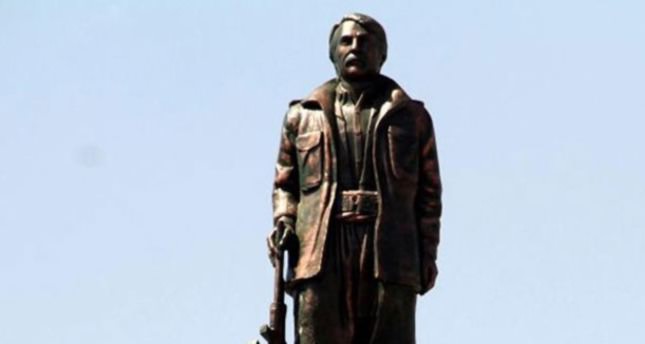 by Daily Sabah Aug 18, 2014 12:00 am
A statue of Mahsun Korkmaz, a senior leader of the terrorist organization PKK, that was unveiled in the southeastern Turkish province of Diyarbakır, will be demolished, a court ruled on Monday.

The statue sparked outrage among nationalists and triggered a probe by authorities. The statue was erected at a cemetery the previous day where slain PKK militants were buried.

Following a complaint submitted by the Diyarbakır Governorship on Sunday, the Lice Criminal Court ruled on the next day to demolisht the controversial statue that sparked ire across the country.

Nationalist Movement Party (MHP) leader Devlet Bahçeli has recently claimed that the erection of the statue after the presidentia election of Aug. 10 was a sign of compromise by the ruling Justice and Development Party (AK Party); however, the demolishment ruling proves Bahçeli wrong, political experts say.