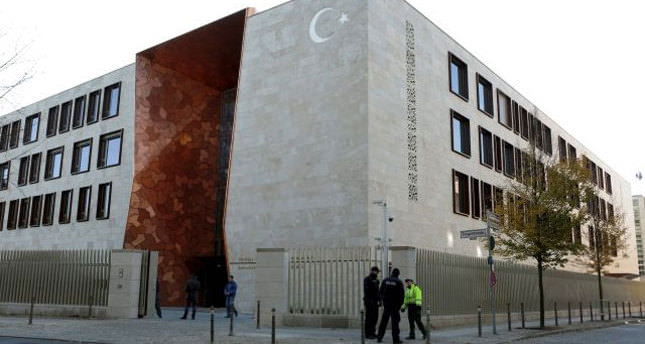 by Daily Sabah with Agencies Aug 19, 2014 12:00 am
Russian police on Monday arrested a man who fired shots at the Turkish embassy in Moscow, Russian news agencies reported. The gunman had twice opened fire with a hunting rifle at a sign on the embassy building, they said, citing police. Russian media identified him as Artur Mirzoyan, an Armenian businessman. The shots hit the Turkish coat of arms, the Moskovsky Komsomolets newspaper said in a report published online. Nobody was hurt in the incident, which occurred shortly after 8:00 a.m.

Diplomatic relations between Armenia and Turkey have been halted since 1993 due to the Karabagh conflict between Azerbaijan and Armenia.
Moreover, in January 2013 Sargsyan has stated that Armenia would not retreat regarding the Nagorno-Karabagh issue despite sanctions imposed by Turkey and Azerbaijan. In 2005, Turkey sent a letter to the then prime minister and requested the establishment of an expert commission (Common History Commission) to analyze and research the 1915 incidents along with researching the archives of other countries. Likewise, two protocols to develop bilateral relations were signed in 2009 but Armenia has paused ratification of the protocols.
Last Update: Aug 19, 2014 1:32 am
RELATED TOPICS