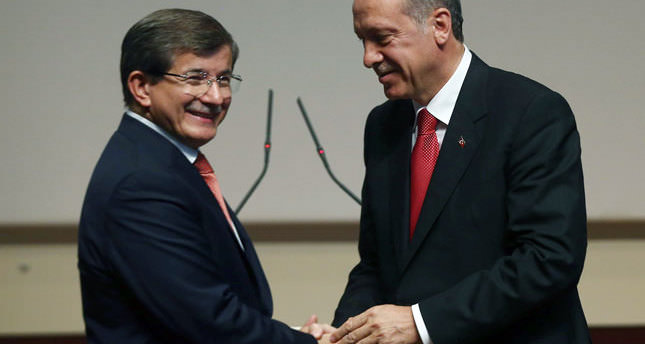 by Daily Sabah Aug 21, 2014 12:00 am
Turkey's ruling AK Party's Central Executive Board (MYK) gathered last time under the chair of Prime Minister and President-elect Recep Tayyip Erdoğan to decide on the next chairman of the party who also will be next prime minister on Thursday at the party headquarters in Ankara. After three hours of meeting, Erdoğan announced the decision of the executive board to name Foreign Minister Ahmet Davutoğlu - known as "the Hoca" (Professor) by party members - as a candidate to be his successor for the party chairmanship.

Speaking after the MYK meeting, President-elect Erdoğan said, the AK Party did not make the decision lightly, and held a number of meetings before giving its decision. "I reiterated this many times. I know it very well that we have many fellows who can take this important position. All the names, which were spoken out during this process, are very important for us. The unity of this movement is above everything," Erdoğan said before announcing Davutoğlu's name.

Davutoğlu started his speech by thanking President-elect Erdoğan, the MYK members and all party members. "We will continue our work in a stronger position. Those who want to hammer our progress, including the parallel state [a term used for Gülen Movement's infiltration into state institutions] will not be allowed to achieve their aims. The AK Party is not the party of one generation, it will continue its noble service. Mr. President, I feel privileged for being nominated for this position that has historic responsibility," Davutoğlu said.

Erdoğan said there were attempts made to cause conflict within the AK Party, but they all failed and added that the party will experience the real test of its unity after the extraordinary congress, in which the new prime minister will be officially elected.

"Our friend, who will be the chairmanship candidate, is Foreign Minister Ahmet Davutoğlu. Maybe it is early to announce (the candidate) but he will also be our next prime minister. Determination to combat the parallel state was an important point in nominating Mr. Davutoğlu for the position. My dear colleague, Mr Davutoğlu, has shown great sensitivity in compassionate diplomacy and he will surely continue in that direction," President-elect Erdoğan said.

The AK Party MYK's announcement of Davutoğlu as the next party chairman is not surprising to the public. Political circles in Ankara also had intensified their talks about Davutoğlu as the next party chair and several media outlets too started to analyze a prospective Davutoğlu era in the AK Party chair. Erdoğan's criteria for the next prime minister that were shared with the press had given early signs pointing to Davutoğlu, because Erdoğan's criteria fit Davutoğlu well. Erdoğan had said the prime minister should perform both the AK Party chairmanship and be the prime minister at the same time and never be regarded as interim. In addition to these criteria, the new prime minister should not be blocked by the AK Party's internal three consecutive terms rule. Allegedly, the AK Party MYK had carefully evaluated the tendencies of deputies and provincial heads along the five days before their meeting and decided on Davutoğlu.

Meanwhile, the first extraordinary party congress in AK Party history will take place on Aug. 28 in which Davutoğlu will be voted on by the delegates for the premiership. The extraordinary congress is going to consist of 1,490 delegates from across Turkey, thousands of journalist and 30,000 people and representatives of other countries are also expected to follow the congress. AK Party Deputy Chairman Süleyman Soylu who is responsible for organizing the congress indicated that this congress will be a milestone on the road of the AK Party's "2023 targets" and added that the congress will also be a farewell ceremony for Erdoğan by thousands of AK Party supporters. "This congress is going to elect both a chairman and prime ministers by its will. This congress will be one of the initial steps on track of the 2023 targets, Turkey's future and political agenda will be determined," he said adding, "This will be a day in which the nation's glory and victory will be declared."

Davutoğlu began his political journey with his appointment of chief advisor to the prime minister in 2003. He graduated from Boğaziçi University with a double major in political science and economics. He also completed both a master's degree and Ph.D. at Boğaziçi University. He established the political science department at the International Islamic University of Malaysia. He became an associate professor in 1993, and lectured at Marmara University for four years. Between 1998 and 2002 he was a visiting lecturer at the Turkish Military Academy and the War Academy. He also worked at Beykent University in Istanbul as a professor from 1995 to 2004 as the head of the Department of International Relations. He has published many books and articles on foreign policy both in English and Turkish and has served as the foreign minister of Turkey since 2009.