New boss of Turkey's foreign policy is still a puzzle 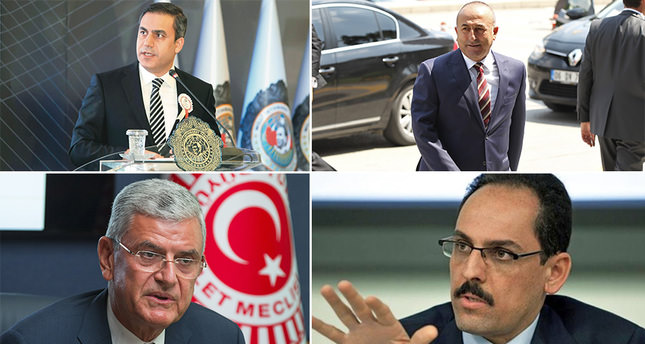 by Fatih Şemsettin Işık Aug 22, 2014 12:00 am
Nominated as the new prime minister and chairman of the AK Party, Ahmet Davutoğlu, is a figure who has left his mark on foreign policy since the AK Party came to power in 2002. He began his political journey with his appointment as chief advisor to the prime minister in 2003. After six years of counseling, he was appointed foreign minister in 2009 as the first minister to be brought into the cabinet in the AK Party era.

With his post in the office of the Foreign Ministry terminated by being nominated for prime minister and AK Party chairman, it is a brainteaser as to who will be Davutoğlu's successor.

People in Turkey and abroad are looking forward for the new foreign minister, as Turkey has become a significant actor in the Middle East and Balkans thanks to Davutoğlu's efforts. In meetings in Ankara, four people's names have been mentioned for the office: Mevlüt Çavuşoğlu, Volkan Bozkır, Hakan Fidan and İbrahim Kalın.

Minister of European Union Affairs and chief negotiator and AK Party Antalya Deputy Çavuşoğlu is a prominent politician when considering, in particular, Turkey's EU Policy. He was the president of the Parliamentary Assembly of the Council of Europe (PACE) from 2010 to 2012, which is the highest level of office that a Turkish politician has held in an international institution to date. He also conducted the chairmanship of the Turkey-USA Inter-Parliamentary Friendship Caucus and received a medal of honor from Russia in 2011 and also from Ukraine in 2013.

As head of the Foreign Affairs Commission in Parliament and AK Party Istanbul deputy, Bozkır is a well-known, quite experienced diplomat who has held many posts in New York, Brussels, Bucharest and Baghdad. He served as secretarygeneral and permanent representative to the EU in Brussels before being appointed to his current post in the assembly. He is also the current chairman of the Turkey-USA Inter-Parliamentary Friendship Caucus. Kalın, the deputy undersecretary and senior adviser to the prime minister, is among the possible nominees to the office. He has published many books and articles about the Islamic world, and has worldwide prestige with his academic personality by being a member of many international academic associations and institutions. He came into the office of the Prime Ministry as a senior consult in 2009.

Fidan, chief of the National Intelligence Organization (MİT) since 2010, is also among the possible nominees. Being one of the chief actors in Turkey's foreign policy in the Middle East in particular, Fidan is a prominent person due to his deep knowledge of the area through his post as the deputy undersecretary in the Prime Ministry from 2007 to 2009 and chairman of the Turkish Development and Cooperation Agency (TİKA) for four years.

Taking into account world-views and patterns in foreign policy, it is salient that none of these names has a position that contradicts the foreign policy followed by Davutoğlu. Both his "humanitarian diplomacy" and "zero problem" strategy with neighbors, furthermore, tried to be carried out by those names in theory and in diplomacy. Although the Middle East and Balkans became more of an issue during Davutoğlu's years as foreign minister, the significant momentum in EU relations between 2009 and 2013 is also remarkable.

Accordingly, it can be said that Çavuşoğlu, who is also one of the founding member of the AK Party, shines through among the likely nominees with his profound experience in Turkey's European foreign policy. Çavuşoğlu's possible accession to the Foreign Ministry could aid in the acceleration of the stagnated relations between Turkey and the EU is expected to be on the scene again.
Last Update: Aug 23, 2014 10:46 am
RELATED TOPICS