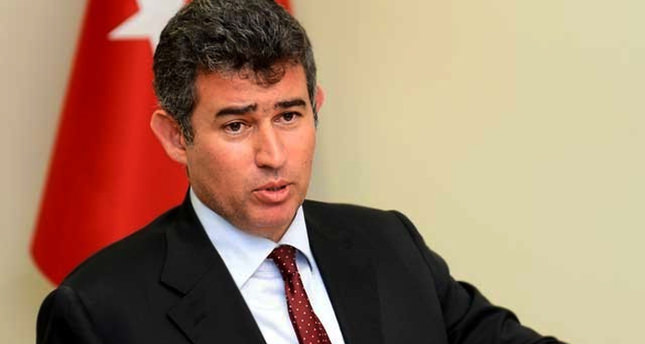 by Daily Sabah Aug 22, 2014 12:00 am
Ahead of the Republican People's Party (CHP) extraordinary party congress to be held on Sept. 5-6, eyes turned to possible chairmanship candidates who will compete against current CHP leader Kemal Kılıçdaroğlu during the congress. After CHP Deputy Chairman Muharrem İnce resigned from his post and announced his candidacy, Turkish Bar Association head Metin Feyzioğlu is reportedly expected to be a candidate as well. Speaking on Fox TV yesterday morning, Feyzioğlu, who had a dispute with President-elect Recep Tayyip Erdoğan a few months ago, said under democratic conditions, he may run.

As CHP dissidents expressed opposition to Kılıçdaroğlu, Feyzioğlu's candidacy is on the agenda. On Wednesday, several media outlets claimed that Feyzioğlu's candidacy will become clear after the Sept. 1 judiciary ceremony. Noting that he warned the CHP administration on the presidential election, Feyzioğlu said, "I will be a candidate not to polarize, but to unify. Of course, I have a political view. Of course, I will be a candidate. Why not? This is my democratic right, and [will do so by the] instruction of millions of citizens to me."

Feyzioğlu also said that the CHP had no time to discuss the Aug. 10 presidential election failure and even the March 30 local election defeat. In May, Feyzioğlu occupied Turkey's agenda, and was criticized by the ruling Justice and Development Party (AK Party) and certain opposition parties, including the National Movement Party (MHP), due to his politically motivated speech against the government at the 146th anniversary of the Council of State.

As a harsh critic of government policies on numerous issues, he was fiercly rebuked by Erdoğan. Feyzioğlu stated that there will be no justice in the courts if they are politicized. At the end of Feyzioğlu's speech, Erdoğan said, "The [Council of State] president speaks for only 25 minutes, you have been speaking for more than an hour. You are out of line, this is enough." Commenting on Feyzioğlu's criticisms over the government's "insufficient efforts" for the victims of the Van earthquake, Erdoğan said that Feyzioğlu's remarks were lies and left the hall after making his comments.

Meanwhile, the CHP decided to boycott Erdoğan's inauguration, who was elected by a popular vote on Aug. 10. Even though it would be customary for CHP Group Deputy Chairman Güldal Mumcu to attend Erdoğan's inauguration at the Grand National Assembly of Turkey (TBMM), she has reason not to take part in the ceremony. CHP leader Kemal Kılıçdaroğlu also decided to boycott Erdoğan's inauguration. As a state tradition, each political party in Parliament sends a representative for the Turkish president's visit abroad, but the CHP decided not to send a representative for President-elect Erdoğan's visits.
Last Update: Aug 22, 2014 11:09 am
RELATED TOPICS