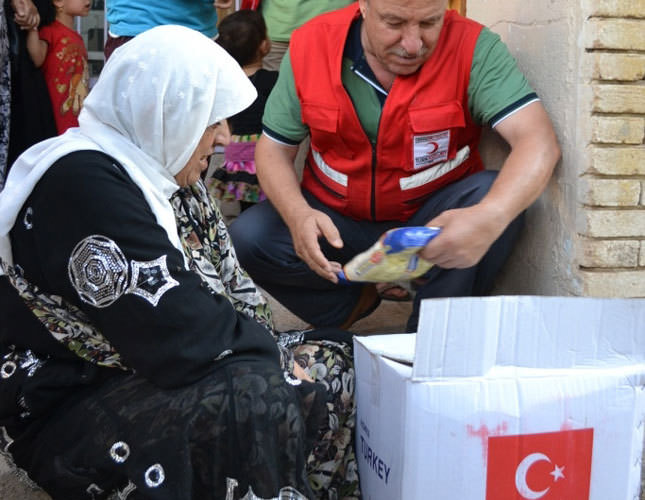 by Daily Sabah Aug 25, 2014 12:00 am
The Turkish Red Crescent continues to extend a helping hand to the needy in Iraq and the surrounding area. A group of Red Crescent members delivered food packages to 180 families in Kirkuk's Altunköprü district. Ümit Türkarslan, who is in charge of Turkish aid to Northern Iraq, said that they came here to win hearts with the help of the aid.

Noting that many families suffered from the clashes in Iraq, Türkarslan highlighted that they delivered aid to all needy people regardless of their ethnicity or sectarian affiliation. Deputy Aydın Maruf, who is a member of the Iraqi Turkmen Front, stated that they coordinated with the Turkish Red Crescent after the Islamic State of Iraq and al-Sham (ISIS) captured Mosul. Maruf thanked Turkey for staying beside them in these hard times.

Meanwhile, Deputy Prime Minister Beşir Atalay said at the beginning of August that Turkey has sent food aid for 10,000 people just after the ISIS crisis began on June 11. "In the last oneand- a-half months, 90 trucks full of food and humanitarian aid have been distributed. All the aid is distributed in coordination with the Iraqi Turkmen Front and the Turkish Cooperation and Development Agency (TİKA), which has delivered food and hygiene supplies for 3,000 people," he said.

Atalay spoke about the future refugee tent cities that will be set up as part of Turkey's aid for displaced Iraqi Turkmens. "We have already transferred about 20,000 tents to the region, and a camp for 20,000 people will be built in a week for our Iraqi Turkmen brethren in Dohuk." Also, Turkey continues to host Yazidis who have fled from ISIS attacks on their homelands.

It is reported that the Health Ministry delivered 441,539 medications, while AFAD delivered food aid for 41,000 people, tents for 12,500 people, 2,000 kitchen appliances and 1,920 beds. According to official figures, TİKA, together with AFAD, delivered food and hygiene aid for 3,000 families to Tall Kayf and its surrounding area, and 450 air conditioners to Khazer Camp. The Turkish Red Crescent also delivered food aid, clothes, beds and tents to needy people in Iraq.
Last Update: Aug 26, 2014 9:06 am
RELATED TOPICS