Kılıçdaroğlu: I may resign if there is a dramatic fall in CHP votes 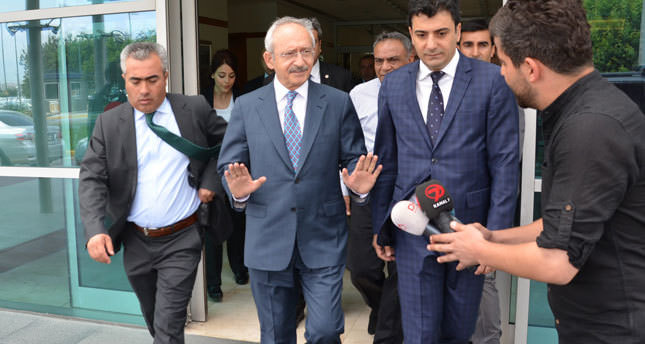 After eight election defeats, main opposition CHP leader Kemal Kılıçdaroğlu said for the first time that he may resign from his post if there is a dramatic fall in CHP votes

Following the eight election failures that the main Turkish opposition Republican People's Party (CHP) experienced under the leadership of party leader Kemal Kılıçdaroğlu, the CHP leader signaled for the first time that he may resign from his post if there is a dramatic fall in the CHP's voting rates. Ahead of the extraordinary party congress on Sept. 5-6 after the CHP's Aug. 10 presidential election defeat, Kılıçdaroğlu addressed CHP members. "If there is a dramatic fall in my party's votes in the 2015 general elections, I will resign from my post. I do not mean a slight decrease; I mean a significant loss around several points. We have witnessed an increase in our voting rates so far."

Responding to Kılıçdaroğlu's statements, CHP Yalova Deputy Muharrem İnce, who resigned from his deputy chairmanship post and announced his candidacy for party chair, noted, "He [Kılıçdaroğlu] said that if there is no significant increase in CHP votes, he would resign from his post in 2011, but now he says the opposite. I am pledging the directorship, this is the difference between us."

Yesterday, when asked whether he will resign from the CHP if he does not get elected as the party chair, İnce harshly dismissed the possibility of resignation by saying, "This [CHP] is my home, this is where my youth passed, I grew up in here."

İnce said that even though Kılıçdaroğlu is content to remain the second party in the Parliament, İnce is not. Giving the green light to former Şişli district mayor and CHP Istanbul mayoral candidate in the March 30 local elections, Mustafa Sarıgül will possibly be commissioned in the new CHP administration to be formed after the extraordinary congress, Kılıçdaroğlu stated that Sarıgül received a considerable vote in the March 30 local elections in Istanbul, and added, "For sure, he [Sarıgül] will significantly contribute to us [CHP]." Kılıçdaroğlu, who has been slammed by intra-party opponents due to his presidential candidate choice, stood behind the CHP and Nationalist Movement Party (MHP) joint presidential candidate, Ekmeleddin İhsanoğlu, and said that İhsanoğlu was the right choice for presidential candidacy. However, certain drawbacks occurred such as a delay in the presidential campaign. "We started the campaign process late. CHP organization faltered because the president was elected by a popular vote for the first time," Kılıçdaroğlu acknowledged.

Following the announcement of İhsanoğlu's candidacy in June, Kılıçdaroğlu admitted on a TV program that he took a risk by announcing İhsanoğlu as a candidate. The CHP leader said he is a party leader and if a party leader does not take a risk, it is a sign of a problem, and that he took the risk for the sake of the country.

Leaning on Kılıçdaroğlu's risky move, İnce made harsh remarks on Kılıçdaroğlu's joint candidate choice in the past weeks. İnce reiterated Kılıçdaroğlu's "I took the risk" comment on İhsanoğlu, and said that risky moves caused an extraordinary congress to take place in politics. In an interview yesterday with the Turkish daily Habertürk, İnce asserted that Kılıçdaroğlu likes people with rightwing ideologies more than those who have left-wing ideologies. "He [Kılıçdaroğlu] does not like leftists and does not trust their power, which is why he keeps away from them," said İnce.
İnce reiterated that Kılıçdaroğlu became a party leader by vowing to destroy the empire of fear, yet his actions are leading him to dictatorship. İnce claimed that the ruling Justice and Development Party (AK Party) followers supported Kılıçdaroğlu because the CHP will never come into power under his leadership.

Also, İnce noted that if he takes over party leadership, he will open the path to women wearing the headscarf to be part of the Turkish Parliament under the CHP.

CHP dissidents also agreed on İnce's candidacy, and the candidacy of certain names such as CHP Ankara Deputy Emine Ülker Tarhan and the head of Turkish Bar Association Metin Feyzioğlu, was dismissed. According to Sabah newspaper, neo-nationalists within the CHP started to lobby on behalf of İnce. While İnce and Kılıçdaroğlu appear to run against each other for party leadership at the CHP extraordinary congress, Feyzioğlu strictly dismissed that he is a candidate for CHP party chair in an interview with the Turkish daily Hürriyet.
Last Update: Aug 26, 2014 9:20 am
RELATED TOPICS