Erdoğan bids farewell: AK Party will never be a one man party 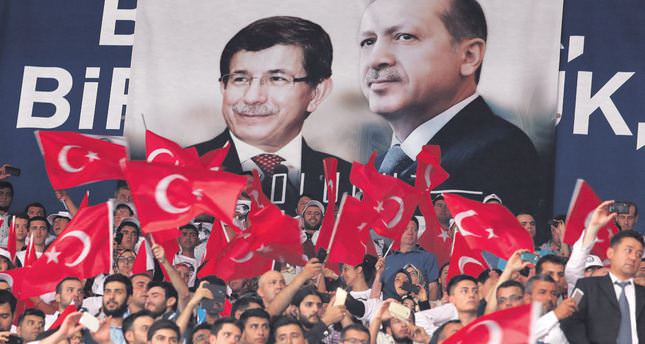 During its first extraordinary congress on Wednesday, the ruling Justice and Development Party (AK Party) elected Foreign Minister Davutoğlu as its new chairman - who will also be the next prime minister - as President-elect Recep Tayyip Erdoğan left the party days before being sworn in as Turkey's first directly-elected president. Erdoğan rejected claims that Davutoğlu, who is set to replace him as prime minister, would merely do his bidding as he continues to rule Turkey from behind the scenes. His comments during a farewell speech to delegates of his AK Party come amid widespread expectations that Davutoğlu would take more of a backseat role, and that Erdoğan, who has dominated Turkish politics for over a decade, would maintain his grip on government. The vast congress mustered some 40,000 people at an Ankara sports arena and in a marathon two-hour speech, Erdoğan said the government's strategy would not change with the handover. He then said that the party had "always excluded personal ambitions and arrogance… names have no importance."

Erdoğan, who has two sons and two daughters, described the party he helped found as his "fifth child" but said the "farewell time" had come. "The AK Party will never be a one-man party. It is a party of principles. Our cause will not change tomorrow and it will not be abandoned in the future,"
Erdoğan told party delegates who convened to confirm Davutoğlu, 55, as its new chairman and prime minister-designee.

Although the office of president is mainly ceremonial, Erdoğan has indicated he wants to transform the position to an executive one. He has said he will activate its seldomused powers, such as summoning and presiding over Cabinet meetings.

Nevertheless, Erdoğan suggested that Davutoğlu would not veer from the goals he has set for Turkey, and Davutoğlu will form the new government immediately after his inauguration ceremony, and the new Cabinet would be established by Friday according to Erdoğan. Furthermore, Erdoğan extended an olive branch to the opponents in his farewell address, stating, "We understand you, your historical background, lifestyle, values, demands and desires very well. I extend my hand again on behalf of my party, my government and the movement I am the leader of."

Erdoğan reiterated that Davutoğlu - the incoming prime minister - will not be a pawn as many newspapers write, and vowed to work with the new government for harmony and cooperation as they have when they worked with outgoing President Abdullah Gül. He stressed that he would remain in close contact with his party within the restraints of the law and the Constitution.

Davutoğlu is expected to be designated as the prime minister on Aug. 28, after President- elect Erdoğan is sworn in on the same day. The slogan of the congress "all together for a new Turkey" emphasizes Erdoğan's ambition to transform the country into an economically booming world power. Erdoğan, 60, is expected to revamp what has been until now a largely ceremonial post of the president into a powerful role, with Davutoğlu a loyal ally who will not hinder the process with obstacles. "This is not a change of mission, it is just a change of names," Erdoğan said in an outdoor morning speech in Ankara before heading into the congress. "This is not a farewell. We will continue to serve our people from Edirne to Hakkari," referring to the cities at opposite ends of Turkey close to the borders of Greece and Iraq. In his speech to the congress, Erdoğan insisted that Davutoğlu would be a figure of real stature and power as prime minister. "I would like to stress this: Davutoğlu is not a caretaker. Everyone should know that."
Last Update: Aug 28, 2014 9:08 am
RELATED TOPICS