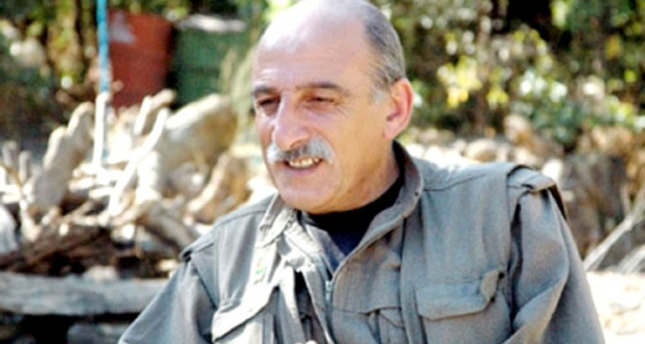 by Daily Sabah Aug 27, 2014 12:00 am
Duran Kalkan, who is a member of the executive council of the Kurdish Communities Union (KCK), which is an umbrella organization for the outlawed PKK, slammed the deadly riots of pro-PKK groups in southeastern Turkey. In his column published on a PKK-affiliated website on Aug. 25, Kalkan - one of the founders of the PKK - criticized certain pro-PKK provocations such as highway robbery, vandalism and erecting a statue of a top militant from the PKK. Kalkan's criticism came while the Turkish government is about to complete a roadmap to end the decades-long conflict.

As efforts to facilitate the reconciliation process between Ankara and Kurds, with a Justice and Development Party (AK Party) initiative, intensifies, Kalkan, who is believed to be a representative of the hardline wing of the PKK, for the first time during the process targeted the PKK's youth group Patriotic Democratic Youth Movement (YDGH) instead of the Turkish state.

Referring to the rising tension over the demolition of a PKK statue, Kalkan said, "Protests that have deviate from the aim are not only unsuccessful, but also bring severe harm." Kalkan pointed out that a new phase is about to start in the reconciliation process, and provocations are not in accord with this new phase.

Criticizing provocations of the vandalism of Istanbul's municipality buses or vandalism of street shops where Kurdish populations reside, Kalkan said that it is not helpful to the YDG-H. He said that these provocations erode the movement's relation with the masses and that these incidents are "nearly provocation," adding, "There is no specific protest model that is valid in every period and suitable to every objective. If the objective changes in accord with the period, protest models change as well." Urging YDG-H members to act in a more constructive manner, Kalkan said that there are positive and negative styles of protests and what is essential is to act in positive manner instead of negative one. Accusing the YDG-H's provocations of being old-fashioned, Kalkan said, "No matter how, there is a renewal in the discourse, planning and projects are oldfashioned."

"They [incidents] are based on the failure to understand the new, to get over the old habits and failing to approach [the process] seriously," asserted Kalkan.

While steps to facilitate the reconciliation process between Ankara and Kurds continue to be taken under the coordination of Deputy Prime Minister Beşir Atalay, PKK leader Abdullah Öcalan, who was sentenced to life imprisonment on İmralı Island, conveyed a message of moderation to PKK militants through the pro-Kurdish Peoples' Democratic Party (HDP) committee that ited him in the past days.

Last week, a summit was held in the Prime Ministry with an aim to finalize the road map to ensure the disarmament of the PKK, which took up arms
against the Turkish state in order to form an independent state in southeastern Turkey, and to prevent any move that may erode the process.

In the summit, officials agreed that certain circles aim to undermine the process and a detailed investigation regarding the recent riots in the southeastern Turkish province of Diyarbakır was launched.

Regarding the riots, Interior Minister Efgan Ala said in a TV program that certain circles collaborated to undermine the reconciliation process because they wanted the continuation of the problems in the eastern Turkey. "They [certain circles] are taking advantage of the terror issue. If the security problem continues in the country, they are taking advantage of it. Now, we [Turkey] have two martyrs [who lost their lives in the recent riots in Diyarbakır], who will pay the price for that?" Kalkan himself is of Turkish origin, and he is one of the three most influential people in the outlawed PKK terrorist organization.
Last Update: Aug 27, 2014 1:35 am
RELATED TOPICS