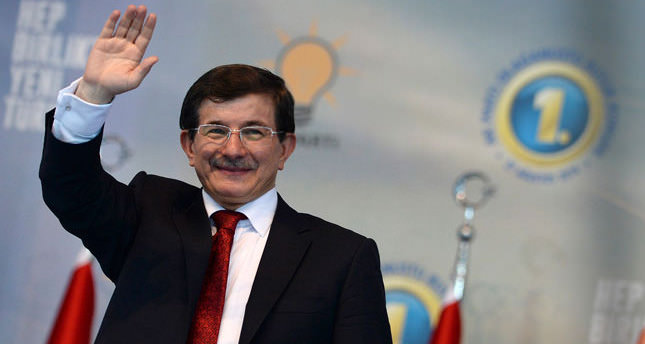 by Daily Sabah Aug 27, 2014 12:00 am
Incoming Turkish Prime Minister Ahmet Davutoğlu has been chosen as the new leader for Turkey's ruling AK Party on Wednesday. Davutoğlu stated that the country needed a new constitution with a liberal character as he set out his vision for Turkey ahead of his expected appointment on Thursday.

In a speech to the ruling Justice and Development Party (AK Party) of President-elect Recep Tayyip Erdoğan, whom he replaced as party leader on Wednesday, Davutoğlu said the two of them would serve together without discord.

Davutoğlu stated that EU membership was a strategic target for Turkey and will be pursued decisively, and added that the country's foreign policy would remain multi-faceted.

"The AK Party is the people itself. We tell our President [Erdoğan], 'We are thankful to you as a nation. You brought this party to power only in just one-and-a-half years.' No one can cause provocation among us. During our ruling, no one will be treated differently. Alevis and Sunnis are the original owners of this country. Just like our non-Muslim brothers. Compassion and mercy is our culture. Freedom of expression, thought and enterprise is under protection by the AK Party governments," Davutoğlu said.